12 Treasures Unrevealing the History and Heritage of Tamil Nadu

Tamil Nadu is the land of myth, history, lore, culture and heritage that dates back to the days of the earliest civilization in India. Magnificent temples, ancient royal dynasties, marvelous architecture and designs, there is a special appeal in Tamil Nadu that tempts travellers to explore.

Glimpse into the political, artistic and cultural mindsets of the past as you explore the rich heritage sites. Here are some of the places you must not miss if you are interested to discover the heritage of Tamil Nadu. 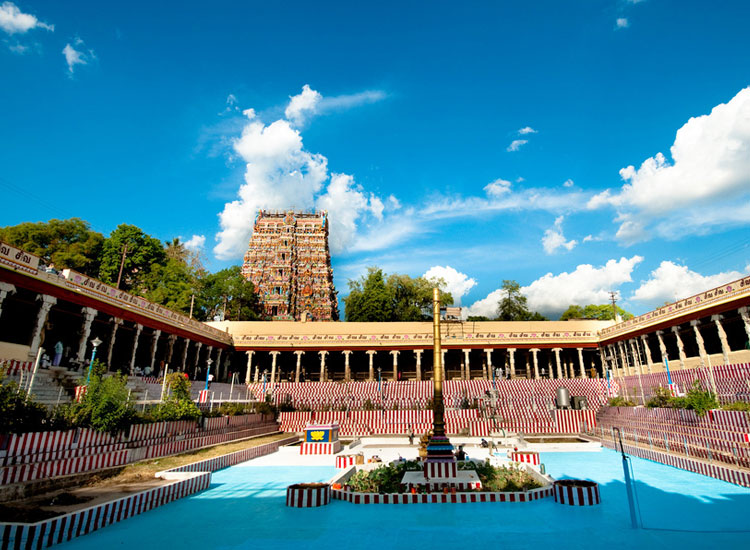 One of best temples in India, Madurai’s Meenakshi Amman Temple is a part of the rich heritage of Tamil Nadu. It’s an excellent example of awe-inspiring architecture and sculpture with 14 magnificent Gopurams. Its origin dates are not clearly known but dates mostly between the 12th to the 18th century.

The temple is dedicated to Goddess Parvati in the form of Meenakshi and Lord Shiva in the form of Sundareswarar. The image of the Goddess said to have been carved out of a single emerald. Walk through the temple complex to marvel at the exciting cultural legacy.

Brihadeeswarar Temple in Thanjavur, one of the Great Living Chola Temples is a specimen of the rich legacy of Tamil Nadu. Built by Chola King Raja Raja I on divine commands received in his dreams, the temple is a grand masterpiece. In fact, it is one of the best architectural splendors of the Chola capital.

The temple houses a 3.7 meter tall linga of Lord Shiva and the tallest vimanam in the world. Wonderful sculptures of various Hindu deities and designs on gopurams add to the charm. The massive proportions and simple designs of the temple is believed to have provided inspiration for many buildings of its time and till date.  The Brihadeeswarar temple is one of the best places in Tamil Nadu that you must not miss. 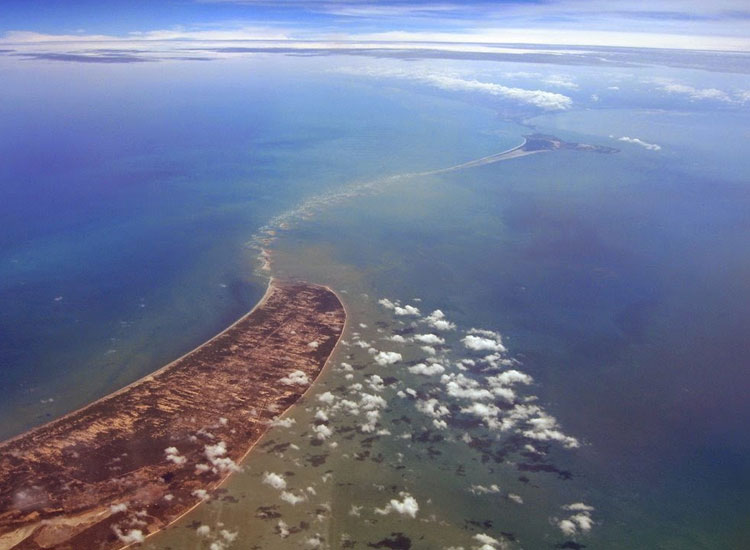 A stuff of legends or a true marvel of science, Ram Setu is a phenomenon. The causeway is created across the sea connecting Pamban Island in Tamil Nadu to Mannar Island in Sri Lanka. There are many theories but no concrete proof. Some believe it to be a natural bridge formed by limestone shoals. However, the Hindu religious theories believe that it is the bridge constructed by Lord Rama and his Vanara (monkey) army as mentioned in the epic Ramayana.

Surprisingly, this causeway is visible from an aerial view even to this day. The whole issue of Ram Setu is mysterious and a fascinating part of the ancient heritage of Tamil Nadu. 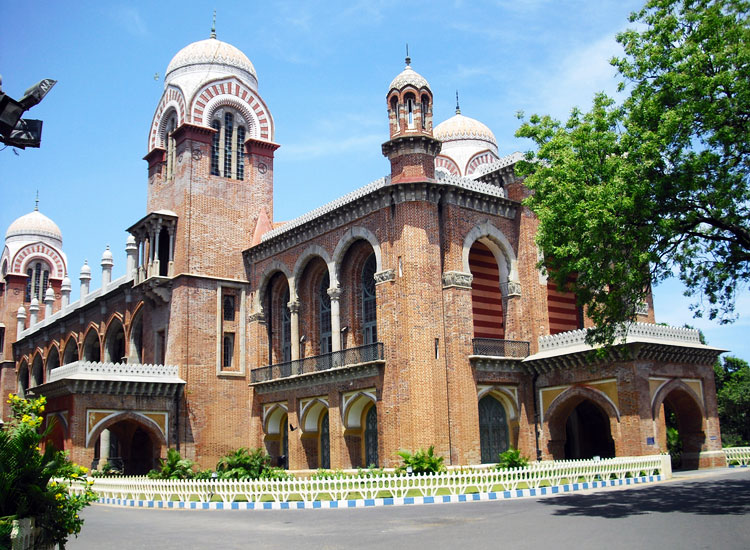 An Indo-Saracenic architectural marvel dating to the colonial British Raj, Senate House in Chennai marks one of most impressive historical monuments in Tamil Nadu. Built in the 19th century, the structure is housed at the Madras University campus. It was the fine design of one of the greatest architects of the time.

The massive house is used by the university for its purposes. Time has harmed the outer façade of the building but it still retains its charm. The Senate house is 130ft long, 58ft wide and 54ft high with massive stone pillars on both side. Exquisite domes adds to the feeling of grandeur that is difficult to match. 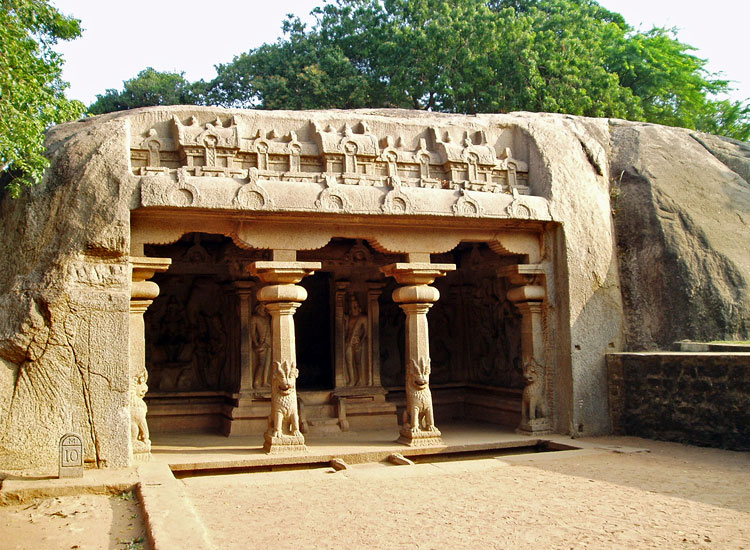 A great example of Pallava art, Varaha Cave Temple is a part of the UNESCO World heritage site of the Group of Monuments at Mahabalipuram. The fine rock-cut architecture temple is known for the most important sculpture Varaha, the avatar of Lord Vishnu, similar to wild boar.

The statue shows Varaha holding Bhumi, Mother Earth in his trunks. Vishnu Trivikrama as a dwarf with one foot on earth, another in clouded sky and the third leg on King Bali is another fascinating sculpture. There are also separate panels with sculpted Brahma, Shiva, Sun, the moon, Goddess Lakshmi and Goddess Durga.

What makes the heritage site in Tamil Nadu all the more appealing is, it the only cave temple in Mahabalipuram where worship is conducted daily in the mornings and evenings. 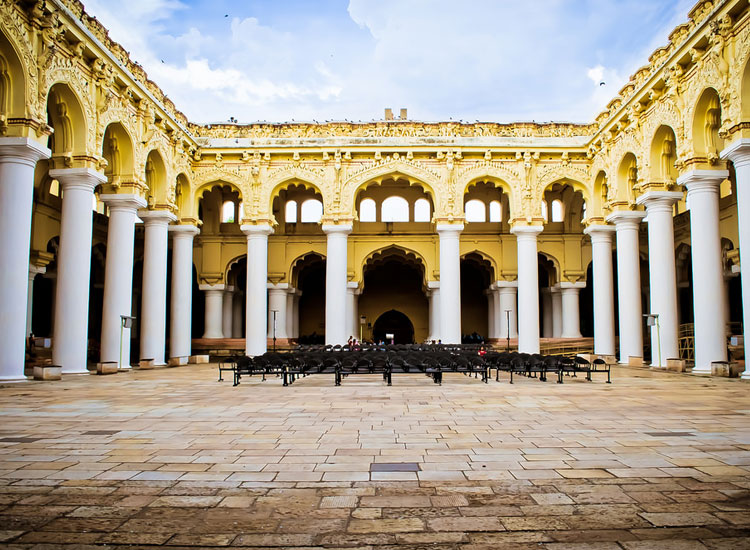 One of grandest palace structure in South India, Thirumalai Nayakkar Mahal is next on our list of the best tourist sites in Tamil Nadu. Built in the 17th century by the King Thirumalai Nayak after whom the palace is named, is a fine example of architectural styles that are both Dravidian, European as well as Islamic.

The original structure had courtyards over four times its current size. Intricate sculptures and other furnishings form the rich interiors. The palace comes to life during the light and sound show that depicts the story of Silappathikaram, considered to be among the five great epics of Tamil literature. 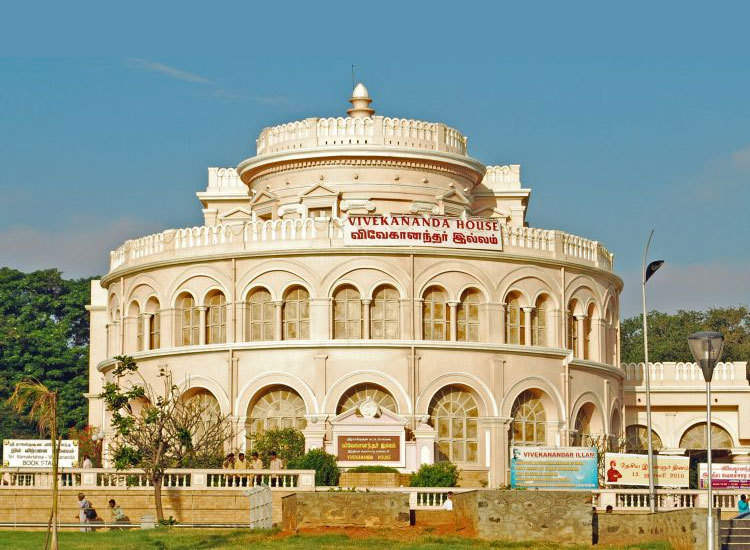 Vivekanandar Illam is an important landmark in Chennai. Associated with the Sri Ramakrishna Math since 1897, the house sheltered Swami Vivekananda during his stay for nine days after his return from the West.

The building went on to serve as the Sri Ramakrishna Math for ten years from 1897 to 1906. Now, this historic site is home to lost souls. The house maintains a permanent exhibition on Indian Culture and Swami Vivekananda’s Life. The famous tourist attraction in Tamil Nadu lures thousands of visitors throughout the year. 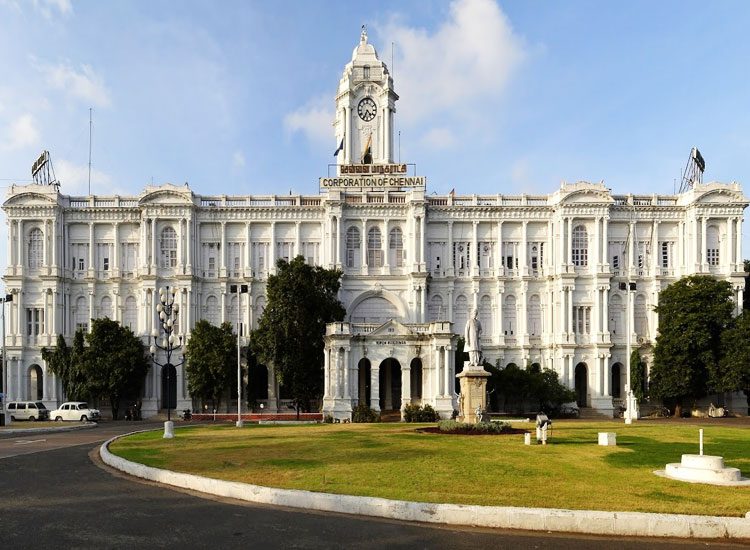 The Ripon Building is a charming specimen of Indo-Saracenic architecture which was built in 1913. The white royal building was named after the then Governor General of British India. Currently, the restored colonial heritage monument shelters the Municipal Government of Madras.

Rectangular in shape with a 43 m tower, mechanically operated clock and four bells, the building is a reminder of the days of the British Raj. Explore the tourist attraction, the mix of neoclassical style of architecture, a combination of, Ionic and Corinthian is a treat for history lovers. 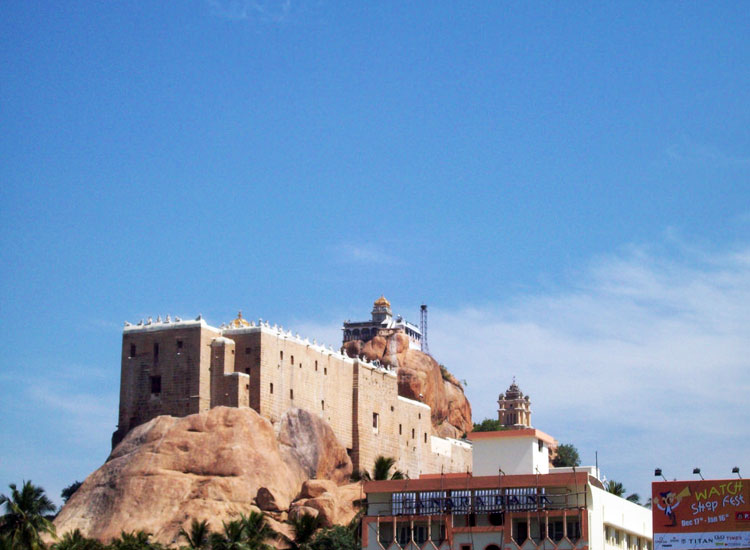 Another historic treat in Tamil Nadu is, the Tiruchirappalli Rock Fort Temple. The magnificent structure is perched 83m high on a massive outcrop, presiding over the city. A part of the legacy of the state, it is one of the fascinating tourist sites here.

The fort has been built and adorned by the Pallavas and Pandyas, who cut small cave temples, but it was the war-savvy Nayaks who later made strategic use of the naturally fortified position. To get to the top of the fort requires climbing over 400 stone-cut steps but the view of the panorama and the interesting heritage makes up for the strenuous effort.

Descent of the Ganges, Mahabalipuram 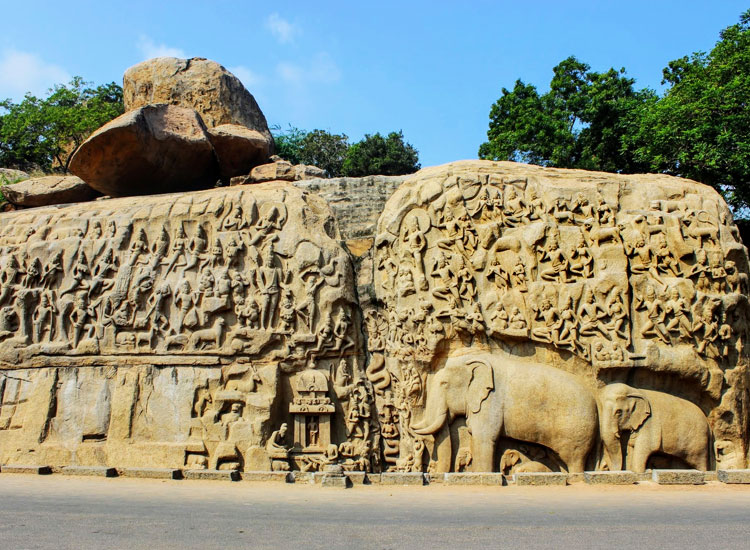 A part of the UNESCO World heritage monument of Mahabalipuram, the Descent of the Ganges is a true treasure. The magnificent bas air relief dates back to the mid-seventh century. 43 feet high and almost 96 feet long, the monolith is carved on the face of two huge adjoining boulders.

The ‘Descent of Ganges’ narrates the legend of penance of Bhagirath, who performed severities in order to bring Goddess Ganges down to earth. The masterpiece includes scenes of the natural and celestial worlds. A natural fissure separates the two halves of the relief. Water pours down from here imitating a waterfall or the Ganges’ descent. The entire presentation is skillful and an awe-inspiring beauty.

The Padmanabhapuram Palace situated in Kanyakumari district is an important heritage site in Tamil Nadu. This popular historical structure actually rolls up under the Kerala Government. Constructed in 1601 AD, the palace went through various modifications and additions over the years.

A beautiful example of the exquisite Kerala architecture, the palace consists of various structures, superb wood work and carvings. Explore the Council Chamber, Queen’s Mother’s Palace, Southern Palace, etc. Also check out relics on display such as the weapons that were used in warfare, the various gifts of tradesmen, a polished stone cot and even a wooden cot that is made up of the wood from 64 different medicinal trees. 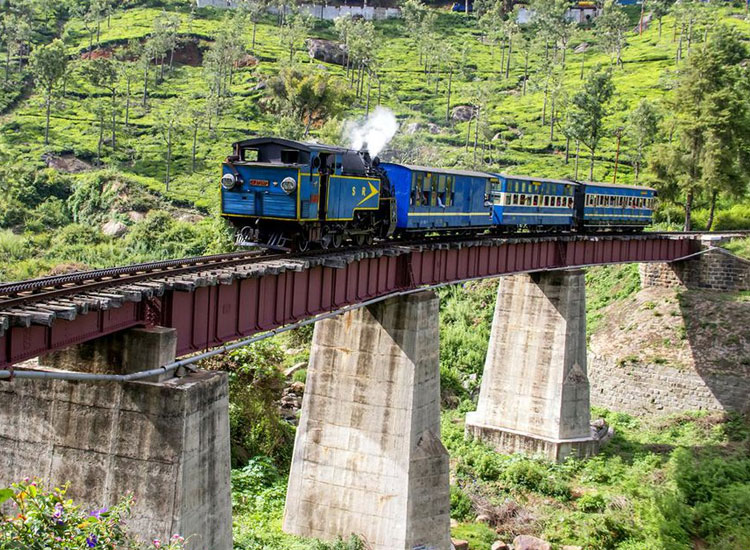 The Toy Train on the ‘Blue Mountains’, Nilgiri Mountain Railway is a unique part of heritage of Tamil Nadu. Its construction was started in 1891 and was completed in 1908. A feat of engineering, comfortable rides and unforgettable experiences, the train itself is charming. It is one of the UNESCO Mountain Railway Heritage Sites in India

Cover the 46 kilometers of its scenic journey through 208 curves, 16 tunnels, and 250 bridges. The beautiful train travel is not just historic its truly wonderful time to pass through the steepest track enjoying the beauty and bliss of Nilgiri Biosphere Reserve.