Wildlife Safari Destinations in India to put on your bucket list

Posted on September 12, 2018 by Debasree Chakraborty

Does the wild jungles lure you? Do you want to explore what wilderness lie within it? Wildlife safaris in India offer the opportunity of a lifetime. Blessed with jungles inhabited by varied wild species, there are a number of locales in the country to indulge in a dose of adventure. Get ready for an expedition in natural bliss with a taste of thrill.

Set foot into wild environs and you ever know you might come across a deadly Tiger, majestic elephants, hear the roar of Lion or get to see the ‘King of the Jungle’, spot colourful birds ad more. Take a look at top spots for wildlife safaris in India. 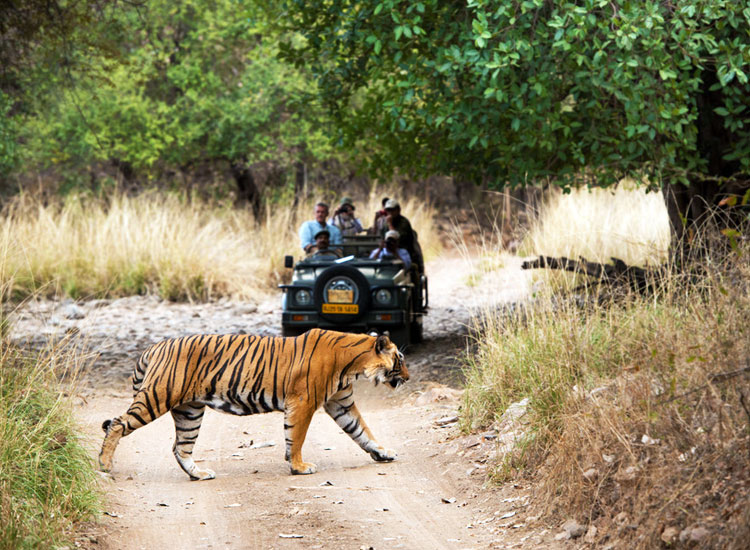 The former hunting grounds of the royal family of Jaipur and now one of the most popular wildlife sanctuaries in India, Ranthambore National Park tops our list. Located in Rajasthan, in the serene town of Sawai Madhopur, this is one of the best places to go on wildlife safari in India.

Nourished by Banas River and Chambal River, the lands are the natural habitat of royal Bengal tigers and comes under the Project Tiger, the initiative of Indian Government to protect the beast. Other thriving species include Nilgai, Indian Bison, sloth bears, wild boars, sambar, leopards, langur, mugger crocodile to name a few. Early morning safaris offer the best opportunity to spot wildlife.

The ruins of the 11th century Ranthambore fort add to the thrill of exploring the national park. Listed among the ‘Hill Forts of Rajasthan’, the fort served as the residence of the royalty and guests when they planned game drives. The view from the ramparts are spectacular.

Best time to visit – the best time to plan a visit to Ranthambore National Park is October to June, while March to May are better for tiger sightings. 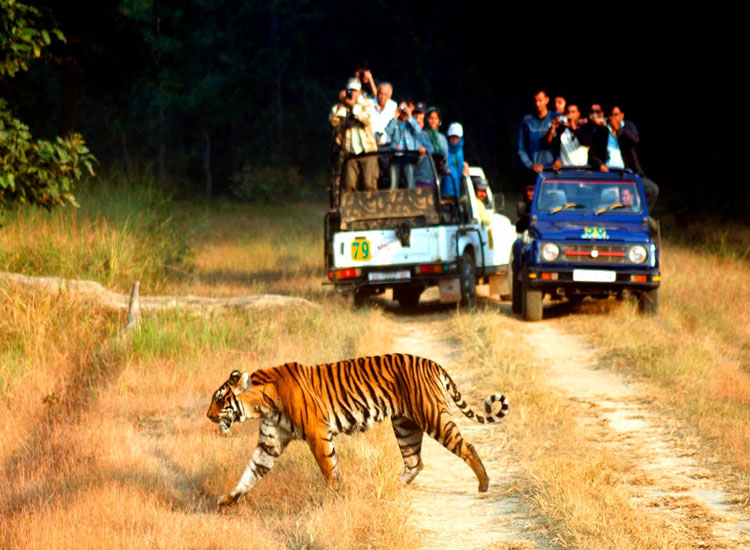 Located in Uttarakhand, the dense jungles of Corbett National Park makes it on the list of wildlife safari destinations to not miss ion India. Known as India’s first national park, the sanctuary is named after Jim Corbett, a British naturalist, hunter, conservationist, and author. It is the kingdom of royal Bengal tigers and till date it is the lure for natural as well as adventure enthusiasts to plan a visit.

The presence of luxury wildlife resorts in the outskirts of the National Park enhance the experience, helping you enjoy that truly wild vacation!

Best time to visit – November to June offer ideal weather conditions to visit Jim Corbett National Park, while tigers are best spotted from March to May. 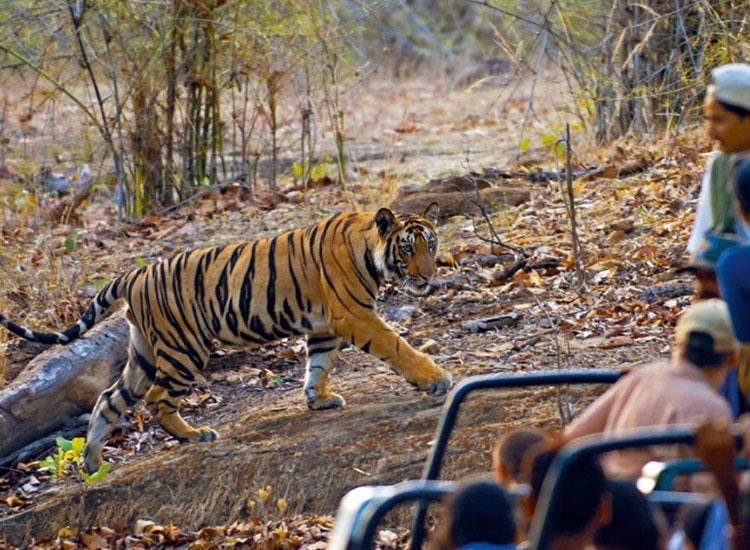 Set in Central India, in Madhya Pradesh, Bandhavgarh National Park is listed among the best wildlife hotspots in the world. Spread in the Vindhyanchal hills, the region is criss-crossed by rivers, ravines and reservoirs that nurture abundance of wildlife species, especially the Royal Bengal Tigers.

In the bygone days, Bandhavgarh served as a hunting lodge for the royal family of Rewa, but with changing time, the sanctuary was converted into the Tiger Reserve. Till date, it has the highest population of tigers in India that also include white tigers. Apart from the ‘Big Cats’ there are leopards, sloth bear, porcupine, spotted dear, avifauna species, etc. inhabiting the area. Both walking safaris as well as jeep safaris are available to explore the wilderness.

The ancient ruins of Bandhavgarh Fort in the park finds its mention in Ramayana. There are also a number of temples that add to the mystery of the wild jungle. Wildlife resorts in the area make your stay unforgettable delight.

Best time to visit – October to June and tigers are spotted during March to May. 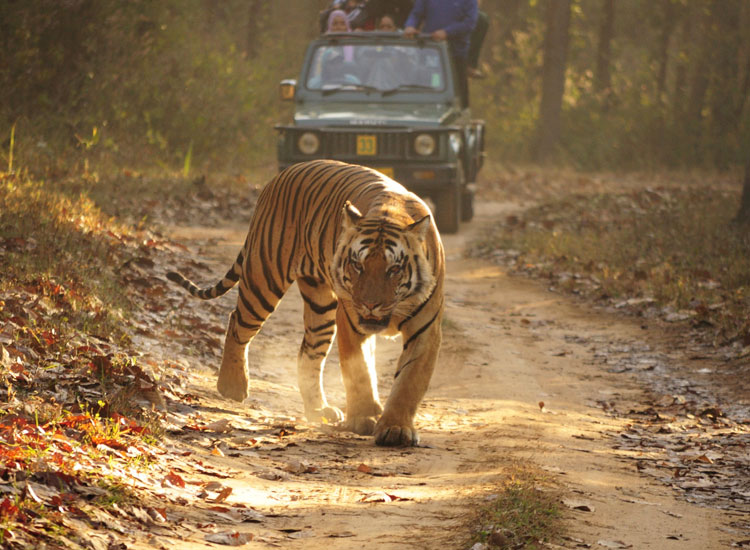 Any list of places to go for wildlife safari in India remains incomplete without a mention of Kanha National Park. The Tiger Reserve is known for its healthy populace of Tigers. The wildlife sanctuary settled in Madhya Pradesh is said to have been the inspiration behind Rudyard Kipling’s Jungle Book, as the writer spent many years of his life in the environs of Kanha.

The title of being one of the best preserved wildlife areas in the world bring visitors from all over the world. The Satpuras bless the area with not just animals but a diverse landscape that have grasslands, rare meadows, etc., myriad of flora species, abundance of species of birds, amphibians, turtles and more. Escape to the world of Royal Bengal Tiger, Black Panther, Bears, Pythons, Elephants and so much more.

A not-to-miss attraction is Bamni Dadar, known as the Sunset Point that offers awe-inspiring view of sunset. The amazing options of wildlife resorts add to the exciting experience of wildlife safari. More information on Kanha National Park

Best time to visit – Plan a visit to Kanha National Park between October to mid-June, while March to May is the ideal season to spot wildlife. 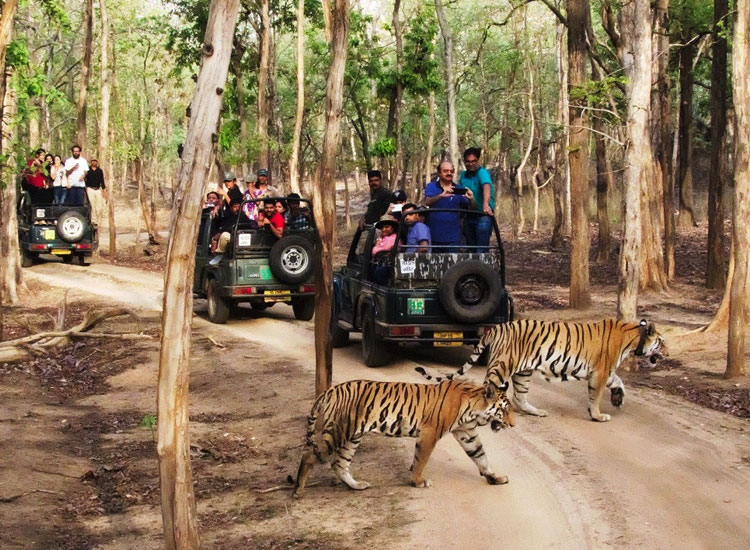 Home to the famous Tigress named Collarwali, who has featured in many international magazines and shows, Pench National Park is one of the most popular wildlife destinations in India. The Tiger reserve settled on the border of Madhya Pradesh and Maharashtra is known for a thriving population of Tigers. In fact the very own ‘Queen Tigress‘ Collarwali has 7 litters and 26 cubs to her name.

Blessed by the Pench River, the national park though small in comparison to other wildlife sanctuaries packs huge in the limited space. 260 bird species, 4 species of vulture, endangered species, mammals, amphibians and many other calls Pench home. Apart from the Big Cats, you can easily spot Nilgai, Leopards, Wild Boars, gaur (Indian bison), sambar deer, etc.

The Land of Rudyard Kipling’s’ Jungle Book, Pench offers not just exciting wildlife safaris but also nature walks, bird watching, boat cruise on Pench River and many more thrills. Escape the cities into the land of the wild and the tiger’s lair. 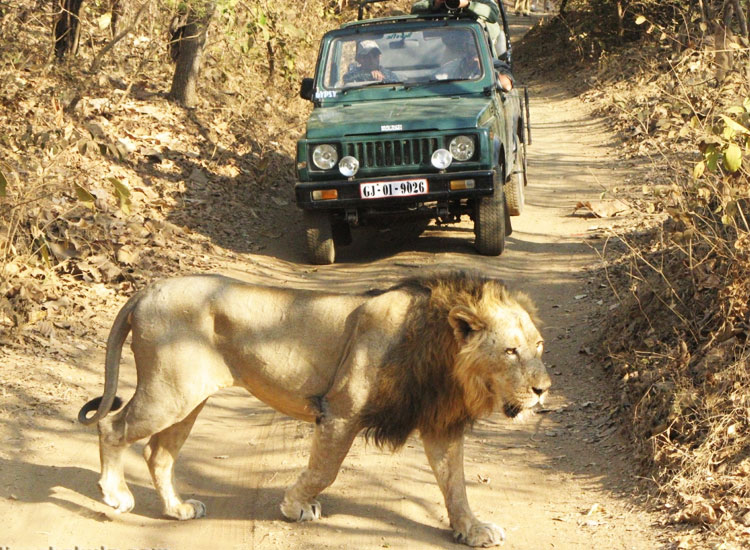 Known for a healthy population of Asiatic Lions, the ‘King of the Jungle’, Gir Wildlife Sanctuary is one of the best wildlife safari destinations in India. In fact is one of the only places to shelter the last of the Lions of Asia. The Nawab of Junagadh, preserved the lands to shelter the wilderness in its true form. Ruthless trophy hunting had swiftly dwindled their numbers and now have been revived in the exclusive sanctuary.

Located in the western peninsula of India, the state of Gujarat, Gir is a nature lovers’ delight. Photographers, adventure enthusiasts and wildlife lovers are enamoured as the landscape is left untouched. Apart from the magnificent rulers of the jungle, the park’s rugged scrubland and forests are home to roughly different 2375 species of fauna along with 38 species of mammals, over 300 species of birds, 37 species of reptiles and over 2000 species of insects.

Best time to visit – December to April is the perfect season for wildlife tours as the weather remains comfortable. Summers are scorching as temperatures rise high. 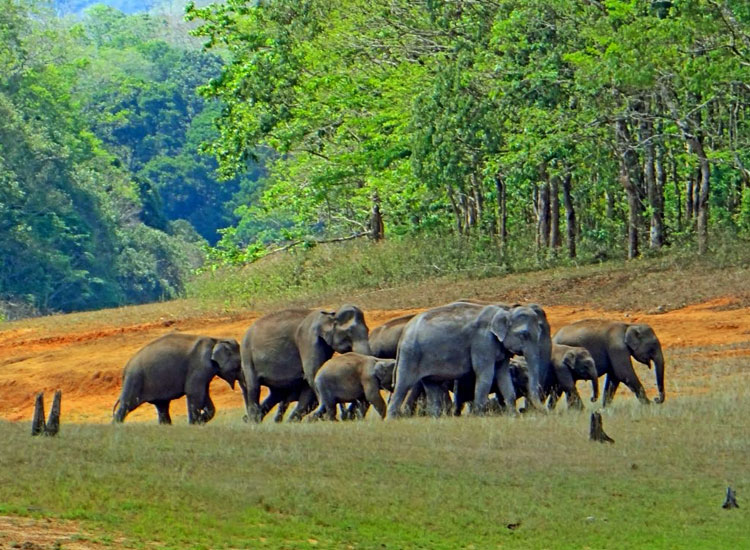 Blessed abundantly by nature, Periyar Wildlife Sanctuary is one of the best places to enjoy wildlife safaris in India. Settled in the lap of the lush Western Ghats, the national park is home to a thriving population of Elephants, the natives of Kerala and other wildlife. It is the only sanctuary that is open even in monsoon and allows the incredible experience of boat safaris.

Located in Kerala, which has the title of God’s Own Country, the wildlife sanctuary is truly blessed. Rolling hills, thick woods, Pamba and Periyar Rivers, Periyar Lake, number of reservoirs and more, have made it one of the best in India. Records state that 35 species of mammals, 266 varieties of birds, 45 reptiles, 30 snakes, 14 lizards, 40 fish, 160 butterfly and many more from the animal kingdom inhabit the environs.

Exploring Periyar is unlike any other, there are options of boat safari, jeep safari, jungle patrolling, nature walks and even staying in the premises of the park. 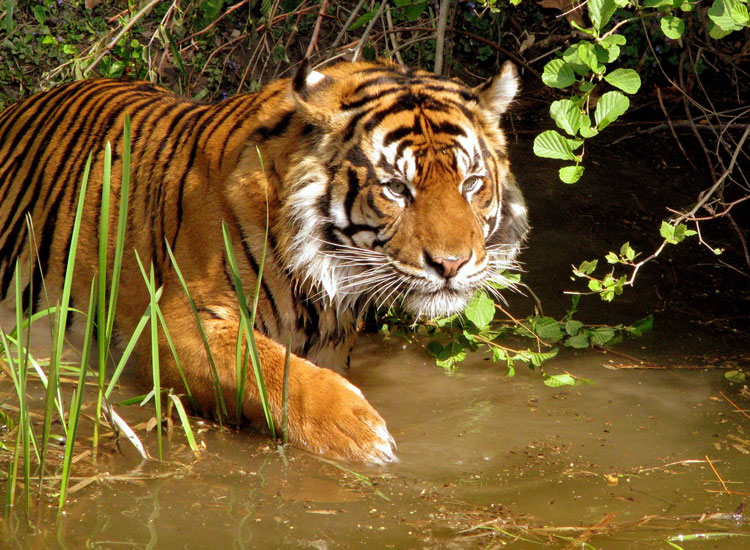 Listed as one of the UNESCO World Heritage Sites in India, Sunderbans National Park ranks among the best wildlife habitats in the world. The territory of royal Bengal Tigers, rare salt-water crocodiles and many other mysteries of the animal kingdom are known for its exhilarating expeditions.

One of the natural wonders of the world, Sunderbans are mangrove forests formed on the delta of River Ganga before merging into the Bay of Bengal. Trees with floating roots named Sundari is the unique lure after which the sanctuary gets its name. The amazing biodiversity also includes 64 other species, around 270 Royal Bengal Tigers, rare salt-water crocodiles, a wide variety of birds and reptiles. The forests are also home to fishing cats, leopard cats, macaques, wild boar, Indian grey mongoose, etc.

Boat safari is the thrilling way to explore the mysteries of Sunderbans. Luxury cruises as well as guided boat tours. More information on Sunderbans National Park

Best time to visit – October to April is the season to visit Sunderbans. The weather conditions are perfect an also migratory birds fly to the national park making it the best time to plan your visit. 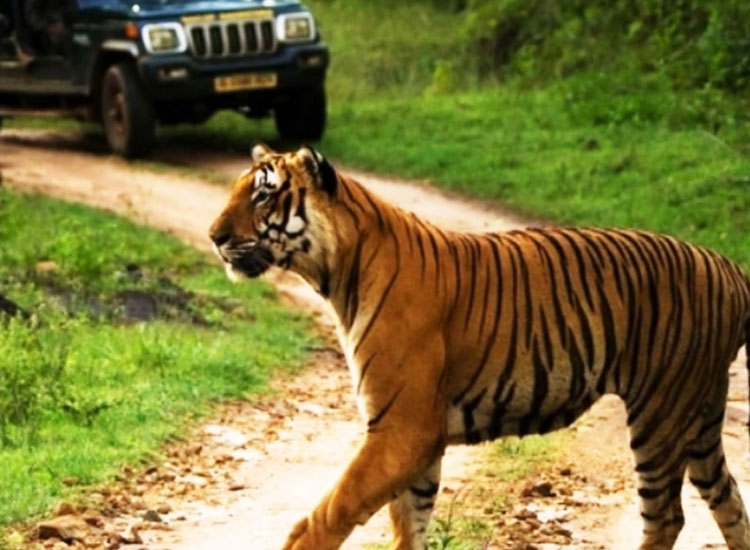 A haven for wildlife, Bandipur National Park features on the list of national parks to not miss out in India. The premier Tiger Reserve in the country was formerly the private hunting reserve of the Maharaja of the Kingdom of Mysore. The sanctuary is now one of the largest protected areas for wild elephants in not just India but also South Asia.

Settled amid picturesque beauty of the Western Ghats, the haven of wilderness is blessed with diverse flora and fauna species. The most popular inhabitants include Tigers along with wildlife species like gaur, sambhar, mouse deer, four-horned antelope, panther, malabar squirrel, porcupines, green pigeon and more. More than 200 species of birds, reptiles, insects add to the diversity of the park.

Safari in Bandipur National Park are fun-filled. The options include bus safaris which are perfect for large groups, jeep safaris for a personal experience, and elephant safaris for the ultimate natural feeling. Trekking, jungle walks and even night time hiking are available for guests.

Best Time to visit: the pleasant season from October to June is the best time to visit Bandipur. 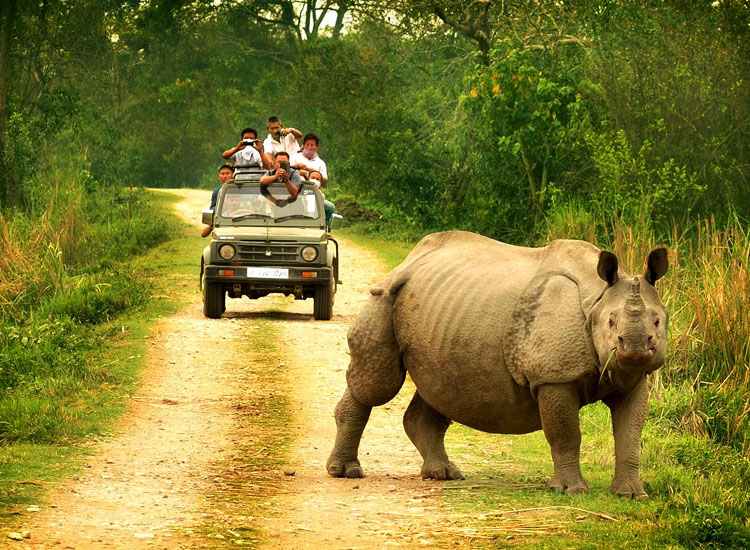 Home of the rare one-horned rhinoceros, some of the last surviving ones in the world, Kaziranga National Park is listed as a UNESCO World Heritage Site in India. Located in Assam along the Brahmaputra River, Kaziranga is one of the best places for wildlife holidays in India.

The large population of one-horned Rhinoceros in the world gets attention from all over the world. Besides, there are elephants, bears, panthers, Tigers and various pretty birds inhabiting this blessed haven in the North East India.

Thrilling elephant safaris as well as jeep safaris provide the opportunity to explore the incredible landscape of Kaziranga. Bird watching is an activity to not miss out on as not are the native birds enchanting, the park also gets migratory visitors from Central Asia in the winter months. Stay at the eco0frienldy resorts add to the excitement. More information on Kanha National Park

Though our list comes to an end, there is no end to the amazing wildlife destinations in India, each offering an insight to nature’s bounty the country has been blessed with.

Visit these Historical monuments of Kerala and explore its history