Places to visit in Delhi: A mix of History and Modernity

Delhi is a curious city where the old is juxtaposed with the new, where the historical architectures seem to constantly ruminate on the glories of the past, while the marvels of modernity announce their presence rather boisterously.

Visiting Delhi, the capital of India, therefore, is akin to taking a roller coaster ride of surprises and unexpected discoveries. Here, the ramparts of a fort announce its invincibility despite the vicissitudes of time, while the fabulous interiors of a modern structure showcases the excellence of human thought and design. In the old winding lanes, one comes across goods, precious items and other exhibits which charm the mind. If the thought of visiting this place has ever crossed your mind, this blog tells you the best places to visit in Delhi. 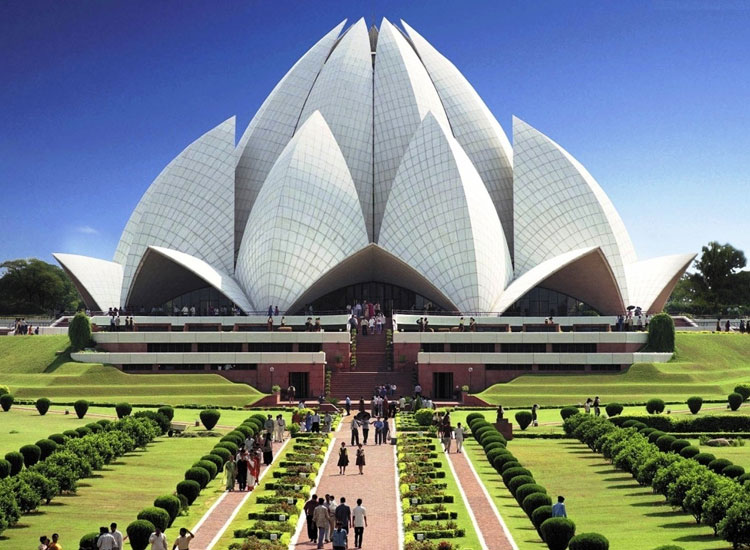 The Lotus Temple, built in the shape of a lotus flower, is the last of seven major Baha’is temples built around the world. Set amongst the lush manicured gardens, this fabulous architecture is made of pure white marble. The architect, Fariborz Sahba, chose the symbol of lotus as its common to Hinduism, Jainism, Buddhism and Islam. The enormous petals are surrounded by nine pools of water, which glow in natural light. 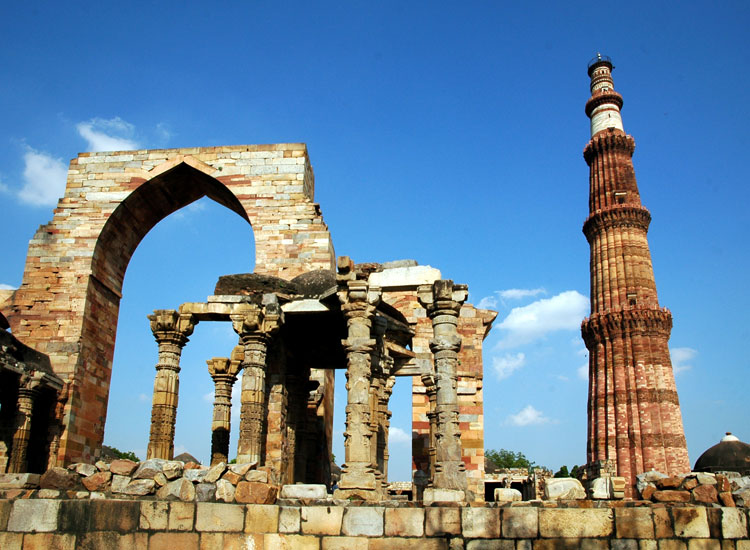 Any sightseeing in Delhi is incomplete without a visit to Qutab Minar. The construction of this magnificent tower, soaring to 73m in height, was begun by Qutab-ud-din Aibak. The tower consists of five storeys, out of which three are made of red sandstone. Quwwat-ul-Islam Mosque, believed to be the first mosque in India, sits at the foot of the tower. The tower measures a 15m at its base and 2.5m at the top. 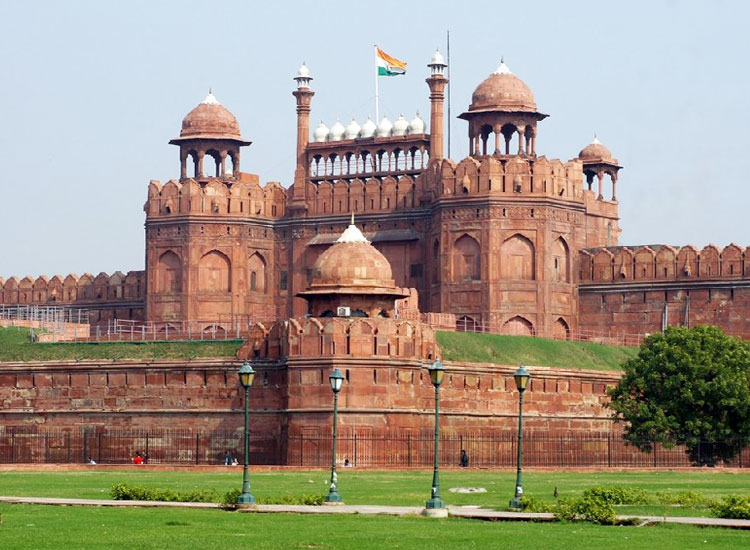 Red Fort, also known as Lal Qila, was commissioned by Shah Jahan in 1638 when he transferred his capital from Agra to Delhi. The fort once consisted of 14 gates, of which the Lahori Gate now serves as the site for Prime Minister’s Speech. Amongst the other attractions here, the most famous ones are Diwan-e-Aam, the Diwan-e-Khas, the Moti Masjid and the Hayat Baksh Bagh. This colossal structure took almost ten years to complete. 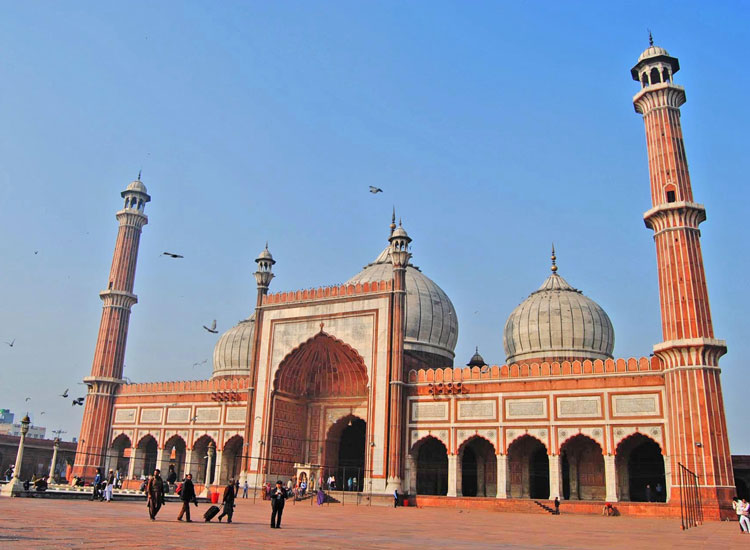 Jama Masjid, located in Old Delhi, holds the distinction of being the largest mosque in India. Its courtyard is capable of holding almost 25,000 devotees at any given time. This amazing mosque consists of three enormous gates, four towers and two 40m minarets which are constructed from white marble and red sandstone. The construction of the mosque began in 1644, and is considered to be a masterpiece by Shah Jahan.

[Take a look at our New Delhi holiday packages.] 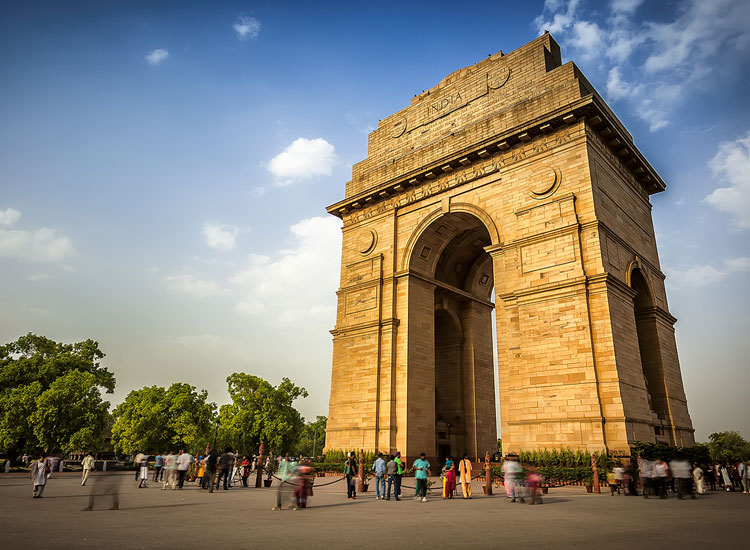 India Gate is one of the foremost tourist places in Delhi. Situated in the heart of New Delhi, it bears a close resemblance to the Arc-de-Triomphe in France. It commemorates the 70,000 Indian soldiers who lost their lives fighting for the British Army during WW1. Here, Amar Jawan Jyoti, the eternal flame burns day and night as a tribute to the soldiers who were martyred during Indo-Pakistan War of December 1971. The entire arch sits on a low base created out of red Bharatpur stone. 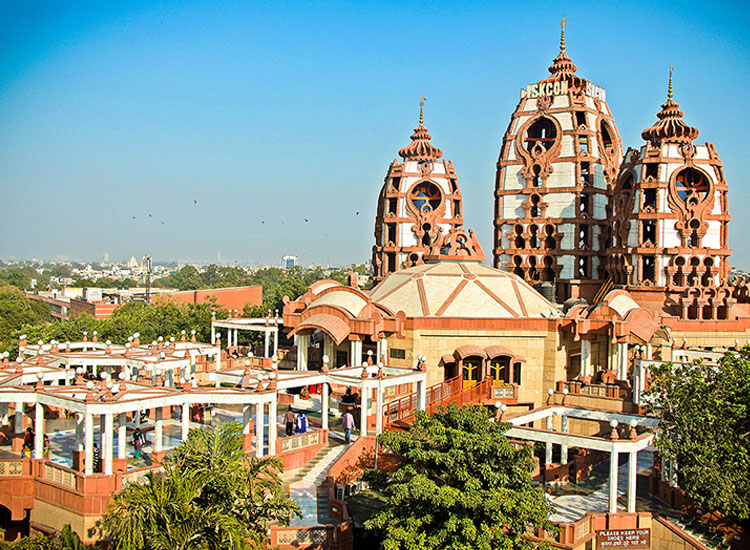 Iskcon, also known as the Hare Krishna Movement, has eight temples scattered across Delhi, with the main temples located at East of Kailash. Also known as “Glory of India-Cultural Centre, the topmost attraction here is the Vedic Expo. This impressive technology centre promotes Vedic Sciences including a high-tech presentation of the Bhagavad Gita, with lights and sounds used for creating historical effects. A robotics show, along with a show on Mahabharata, are the top draws here. 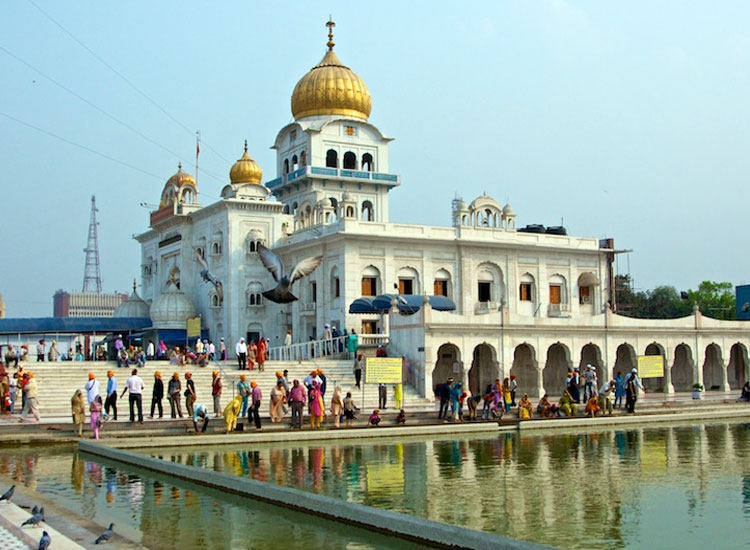 Gurudwara Bangla Sahib is one of the most famous Sikh pilgrimage destinations in Delhi. During the 17th century, it served as the palace of Raja Jai Singh. Inside its premises, one can find the main prayer hall, a water tank, library, museum, hospital, school and art gallery. However, the main attraction here is the “sarovar”, or the pond, whose water is believed to possess medicinal values. One can notice this gurudwara from a distance by its golden dome and flagpole. 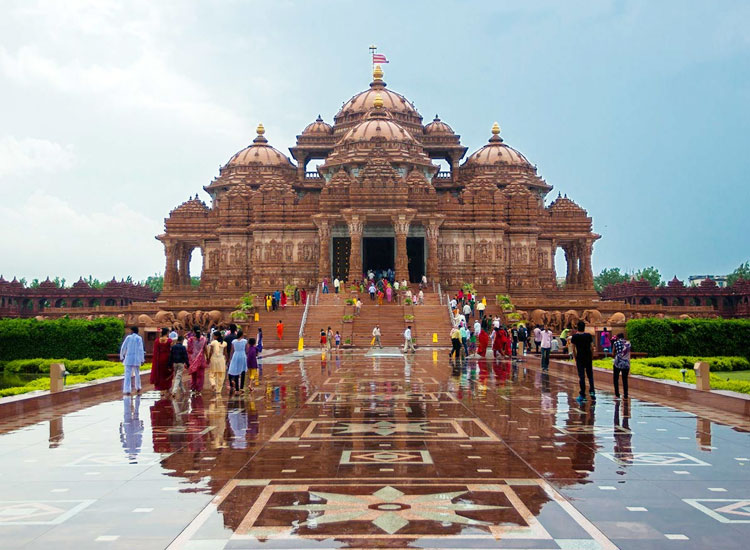 Akshardham Temple, also known as Swaminarayan Akshardham Temple, personifies thousands of years of Indian culture and wisdom in all its glory. This magnificent temple consists of 234 intricately carved pillars, 9 ornate domes and 20,000 statues of Hinduism’s spiritual personalities. The external façade of the temple, known as “mandovar,” measures 25ft high and 611ft long. One of the greatest attractions here is the Sahaj Anand Water Show which recreates a story from the Kena Upanishad with the aid of video projections, multi-colour lasers etc. 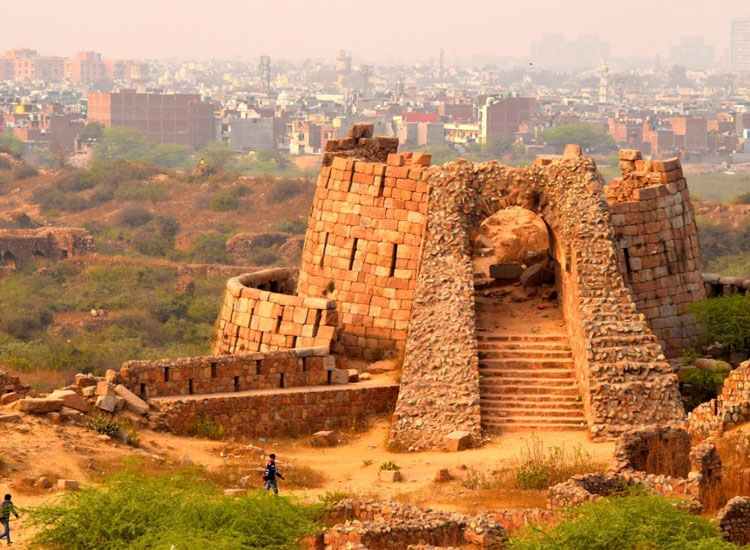 Tughlaqabad Fort is counted amongst the best places to visit in Delhi. Built by the founder of the Tughlaq dynasty, Ghiyas-ud-din-Tughlaq in 1321, this fort is a colossal stone structure, with walls 10-15m in height. Originally, this fort consisted of 52 gates out of which only 13 remain now. A very interesting legend is associated with this once impressive structure. It was completed in four years and its gigantic ramparts and bastions reflect the might of the Sultanate in its day. 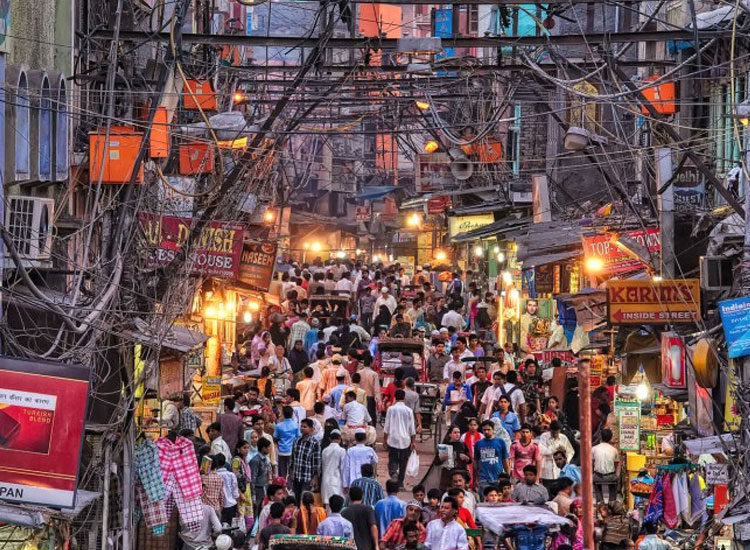 Chandni Chowk market, a densely populated market, has been in existence for three centuries now and was once visited by merchants from Turkey, China and Holland. This is the perfect place for purchasing souvenirs and curios. While Dariba Kalan is famous for its jewellery, the best kind of attar is available at Gulab Singh Johri Mal. For spices, you should visit the Khari Baoli, and for the best kind of fabrics, nothing beats Katra Neel. 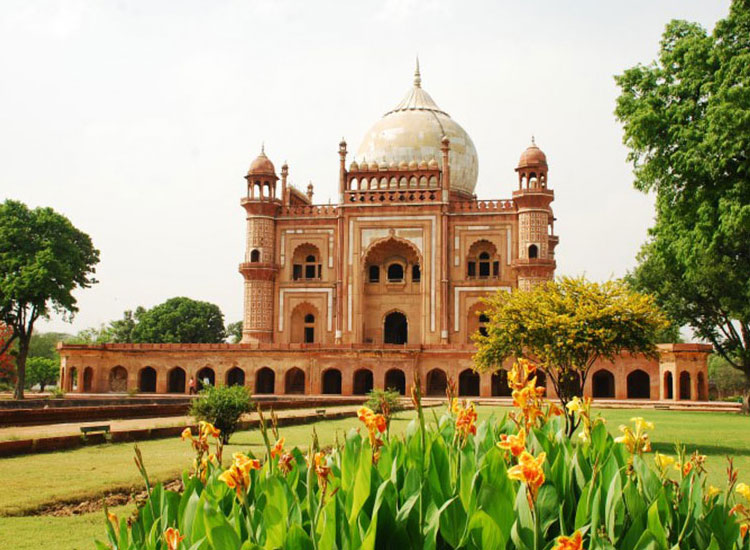 Safdarjung Tomb’s resemblance to Humayun’s Tomb is striking, and at a cursory glance, one could easily mistake one for the other. This structure was built as the mausoleum of Safdarjung between the years 1753-54. One comes across several smaller pavilions with curious sounding names like Jangli Mahal (palace in the woods), Moti Mahal (pearl palace) and Badshah Pasand (king’s favourite) here. This elegant complex also houses a madarsa and a library over the main gateway which is maintained by the Archaeological Survey of India. 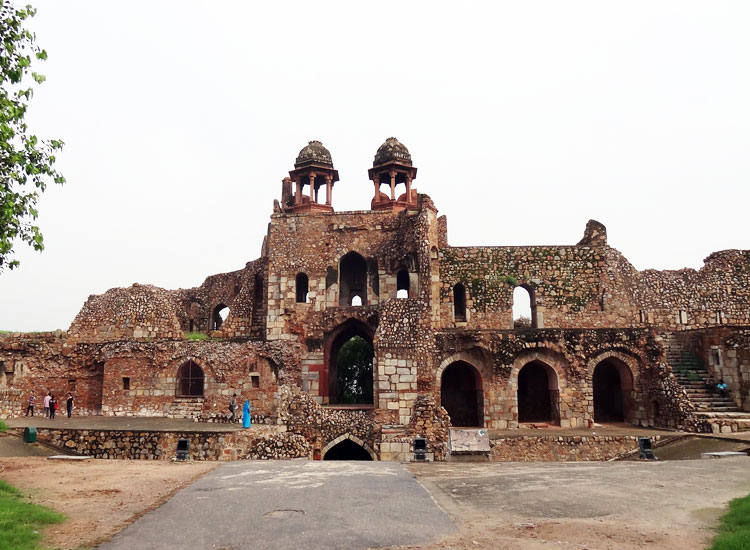 Purana Qila, also known as the Old Fort, stands on one of the most ancient sites of Delhi. The thick ramparts here are topped with merlons which consist of three gateways flanked by bastions. The northern gateway, also called the Talaqui darwaza, combines the typically Islamic pointed arch with Hindu Chhatris and brackets. 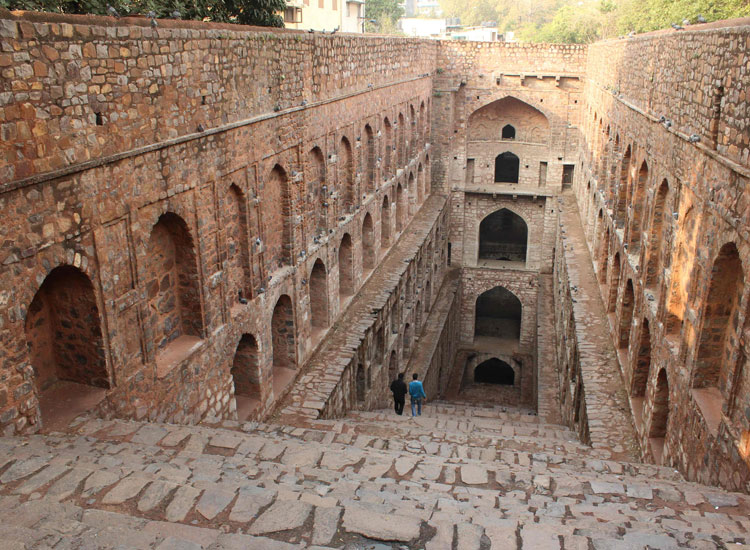 Agrasen ki Baoli (step well), located in Central Delhi, holds the distinction of being one of the best preserved baolis of Delhi. This beautiful step well, carved from red sandstone, was constructed by assembling together uneven stone units, usually known as “rubble masonry.” The monument is divided into four levels with a flight of 108 steep steps leading down to the well. Legend has it that the baoli was built by Maharaja Agrasen.

The Garden of Five Senses, developed by Delhi Tourism Transportation Development Corporation (DTTDC), fulfils the need of a place where the people can socialize and unwind. Inaugurated in 2003, this garden is divided into distinct areas. On one side of the spiral based walkway lies the Khas Bagh, which is patterned after the style of the Mughal Garden. One can also find the sculpture of “A Fountain Tree” in the central axis here, besides 25 other different sculptures and murals. 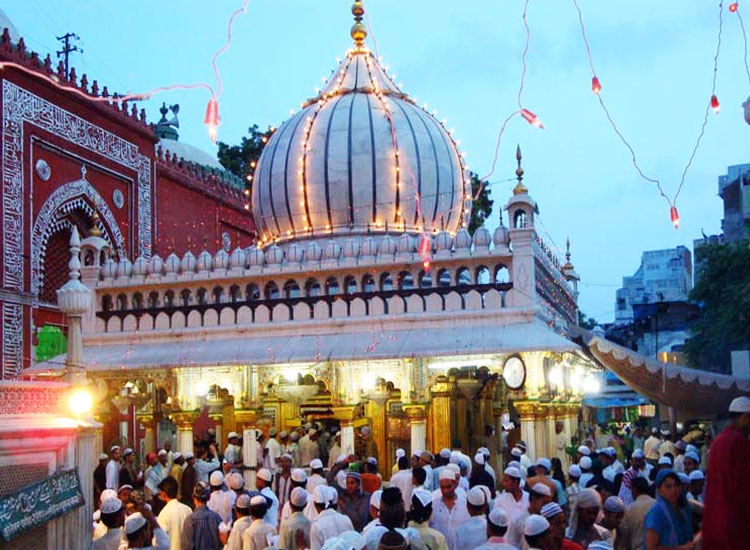 Hazrat Nizamuddin Dargah is undoubtedly one of the most popular places to visit in Delhi. It’s the dargah (mausoleum) of one of the world’s renowned Sufi saints, Hazrat Khwaja Syed Nizamuddin Auliya. This dargah, located in the Hazrat Nizamuddin West area of Delhi, is visited by thousands of Muslims every week, along with a fair amount of people from other religions too. The complex also contains the tombs of poet Hazrat Amir Khusro and Mughal princess Jehan Ara Begum. 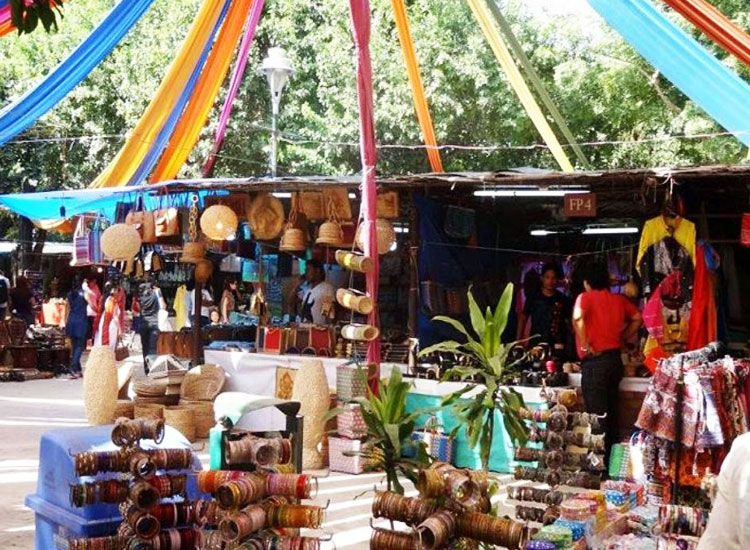 Humayun’s Tomb is one of the earliest examples of the fabulous Mughal architecture in India. It was built by the senior widow of Humayun, Bega Begum in 1565 AD, nine years after his death. The most notable features here are the garden squares (chaharbagh) which contain pathways of water channels, as well as a centrally located well-proportioned mausoleum topped by double dome. The enclosure here contains several graves of Mughal rulers. 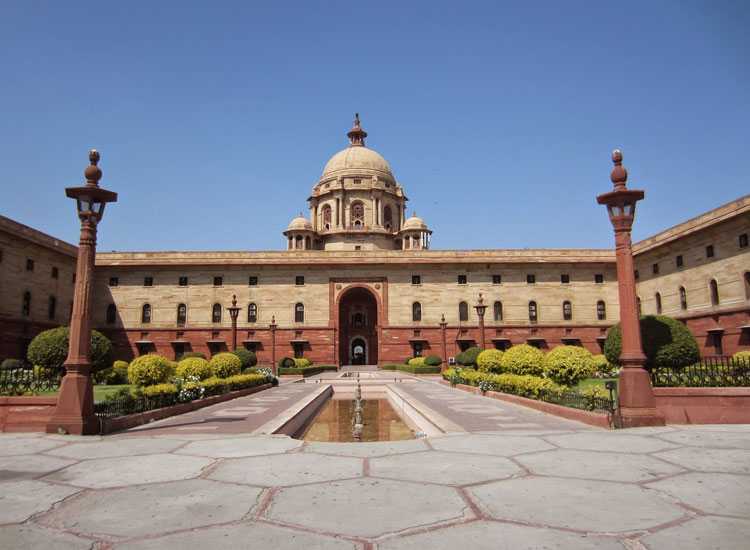 If you are looking to visit the best tourist places in Delhi, you should visit the Rashtrapati Bhawan. This elegant and stately structure, which serves as the President’s residence, was designed by Sir Edwin Lutyens and Herbert Baker. This presidential palace took almost seventeen years to complete and consists of 340 rooms spread over four floors. The famous Mughal Gardens here are spread over an area of 15 acres and showcase over 159 varieties of roses, 60 varieties of bougainvillea and other flowers.