Explore the Best of Karnataka with its Splendid Tourist Attractions

Posted on February 17, 2018 by Vishwajit Sharma 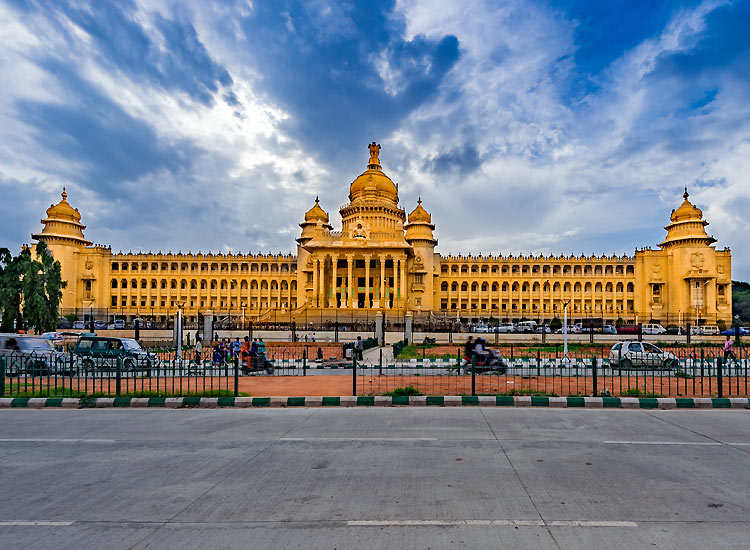 Karnataka has a lot to offer to the tourists. The state is a delightful mix of natural beauty, history and modern glitz. You may find yourself relaxing at the beach in the morning, exploring the ruins of a palace in the afternoon and chilling out at a cool hangout in the evening. Visiting Karnataka is like experiencing a little bit of everything.

These are some of the reasons to visit Karnataka. It is also home to an incredible wildlife and various kinds of plantations which make for great sightseeing and exploration. If you have not yet visited Karnataka, do so once. The experience will be worth it. This blog tells you the places to visit for exploring the best of Karnataka. 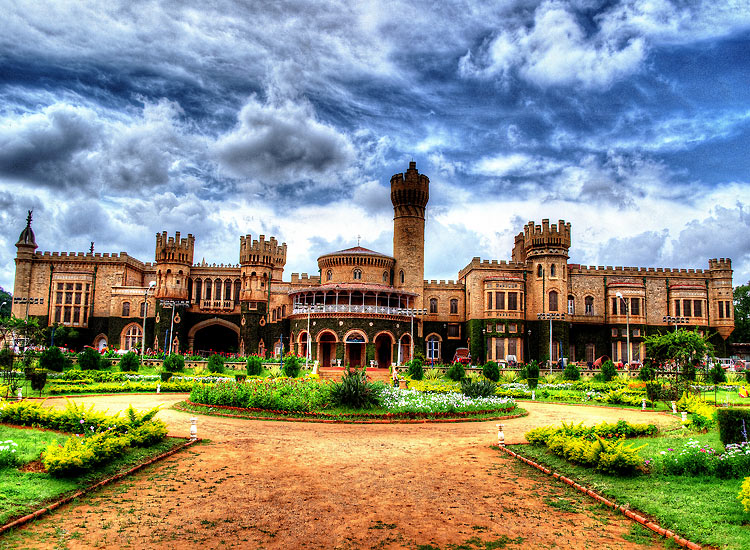 Bangalore Palace is spread over an area of 45,000sq.ft and preserves much of its old regal opulence. The palace’s architecture is a wonderful mix of Scottish Gothic and Tudor architecture and has beautiful carvings on the interiors and exteriors. The palace, apart from drawing visitors for its splendid architecture, hosts several cultural events, rock shows and marriages. According to popular belief, King Chamarajendra Wadiyar sought inspiration from the famous Windsor Castle of London for building the palace. 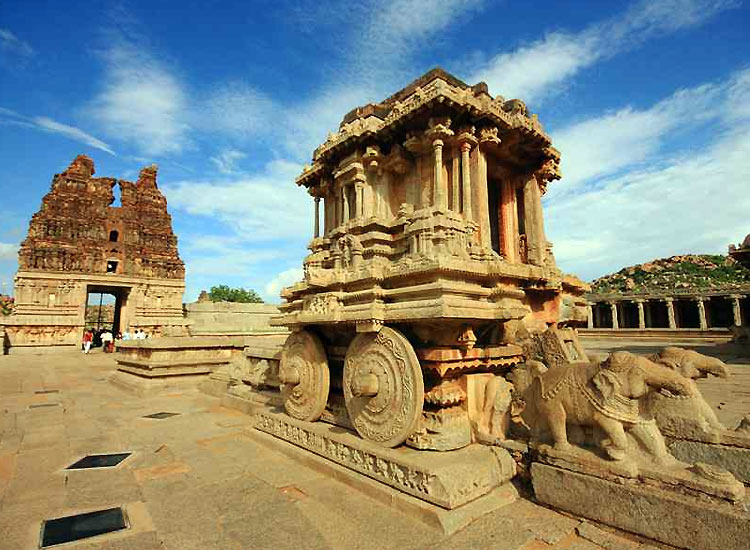 Vittala Temple is one of the best places to visit in Karnataka and is highly praised for its exquisite craftsmanship and fabulous architecture. It’s one of the largest structures in Hampi and attracts a lot of visitors with its stone chariot and musical pillars. The main attractions of Hampi are Maha Mantapa, Musical Pillars and the Stone Chariot. The musical pillars fascinate visitors immensely, because, when tapped gently, they emit musical notes. 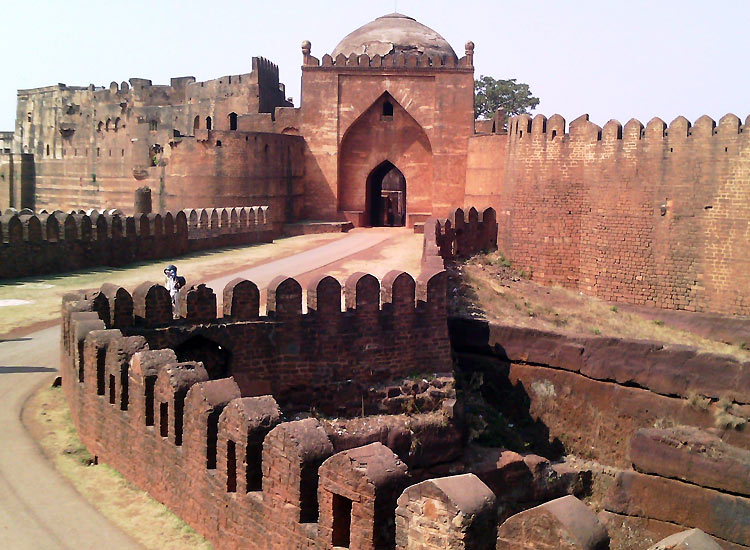 Bidar Fort is one of the most impressive forts in the country. It was built in 1347 during the rule of the Bahmanis and the Persian influence on its architecture is strong visible. The main attractions of the fort, which is the royal palace, mosque and other structures, are housed inside it. Bidar Fort is pentagonal in shape and consists of five getaways for entry. 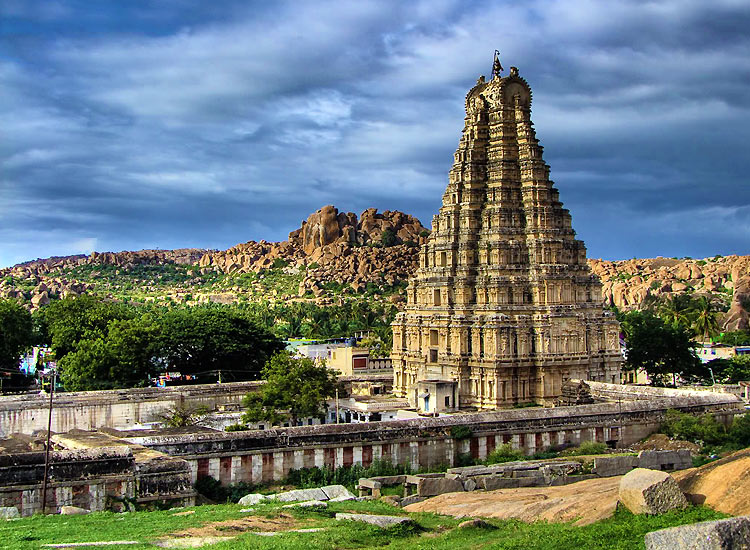 Virupaksha Temple, a UNESCO World Heritage Site, with its glorious history and architecture, is one of the major tourist attractions in Karnataka. The temple, which is dedicated to Lord Shiva, was built somewhere around the 7th century.  A shrine, a hall with numerous pillars and 3 antechambers are housed inside the temple. The eastern gateway, which is nine-tiered and 50 meters in length, is a major attraction in itself.

[Visit the best of Karnataka with this package.] 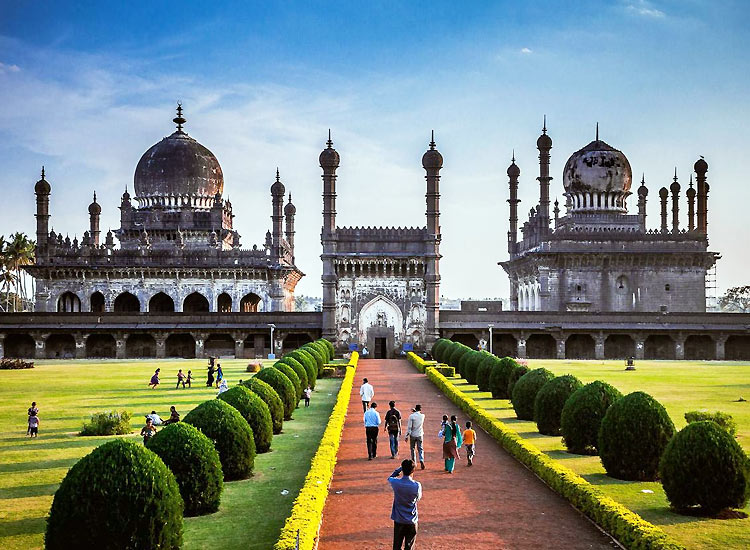 Ibrahim Rouza is considered to be one of the historical monuments in Bijapur, a heritage city. Rauza means the tomb and the structure is called Ibrahim because it houses the tomb of Ibrahim Adil Shah II of Adil Shahi dynasty. Ibrahim Rouza has been built in the style of Indo-Islamic architecture and consists of two square shaped structures with beautiful carvings on it. The mosque is surrounded by a walled garden and also consists of an ornamental garden. The five arches lodged in front of the mosque also catch the visitors’ attention. 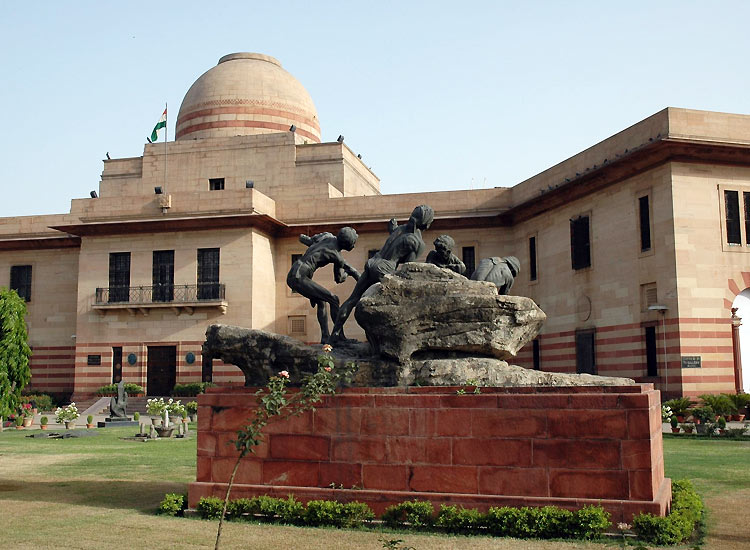 The National Gallery of Modern Art is another tourist attraction in Karnataka worth of your attention. Spread over an area of 3.5 acres, the museum houses an impressive collection of sculptures, paintings, graphic prints and examples of early photography in India. Apart from these, colonial artists, Bengal school and post-Independence artists which led to the modern art of today have also been displayed. National Gallery of Modern Art also holds national and international exhibitions on a regular basis. 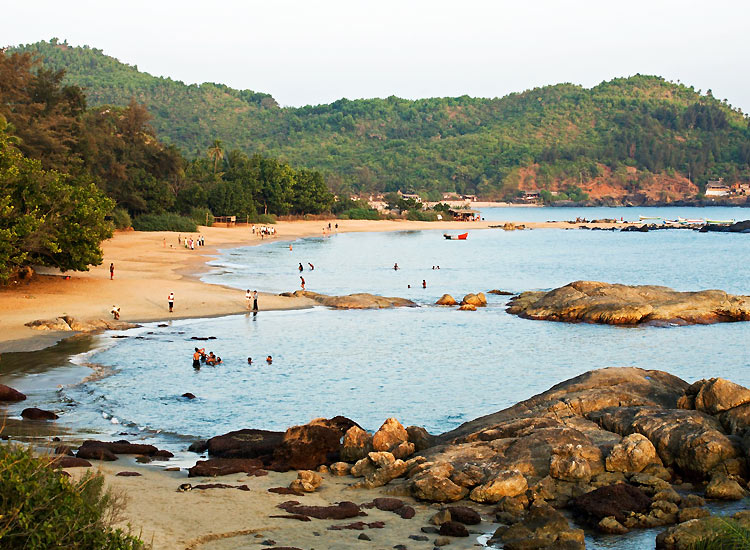 Om Beach is one of the best places to visit in Karnataka for those looking to spend a day in complete solitude and tranquillity. This beach is called Om Beach because of two semi-crescents joining together to form the OM (a Hindu symbol) shape. Apart from relaxing on the beach, tourists can also enjoy a variety of water sports like surfing, jet skiing, banana boat riding and others. Further, one can enjoy magnificent views of the Arabian Sea. 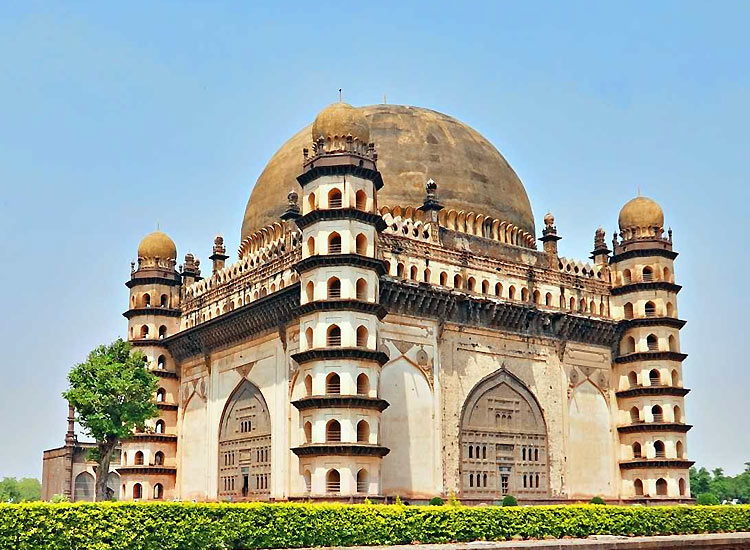 Gol Gumbaz in Bijapur is an enormous structure of immense cultural importance and a prominent landmark of Bijapur city. Built by the Adil Shahi, it contains the tomb of Mohammed Adil Shah. One of the major crowd pullers of this structure are its domes which are believed to be the largest in the world. A crowd favourite here is the Whispering Gallery where sounds produced on one end can be heard in the other.

Gokarna Mahaganapati Temple was built in honour of Lord Ganesh and is one of the two temples which contains a two-handed Ganapati (the other being Idgunji). It’s believed that this temple was built by the royal family of Kadambas in the 5th-6th century. The temple is built on the same premises as the Mahabaleshwar Temple, another famous temple in Karnataka. 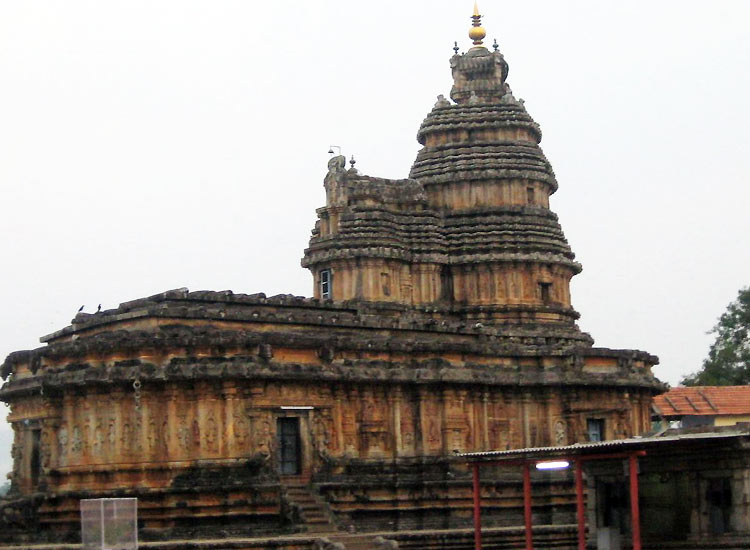 Mahabaleshwar Temple in Gokarna is built in classic Dravidian style and its main deity is Atmalinga or Shiva Linga. It’s said that even glancing at the Shiv Linga bestows upon one immense blessings. The temple is believed to possess the same spiritual importance as the Shiva Temple in Varanasi. The main deity here is Lord Shiva. He is depicted in a standing position and has two arms, and is believed to be around 1500yrs old. 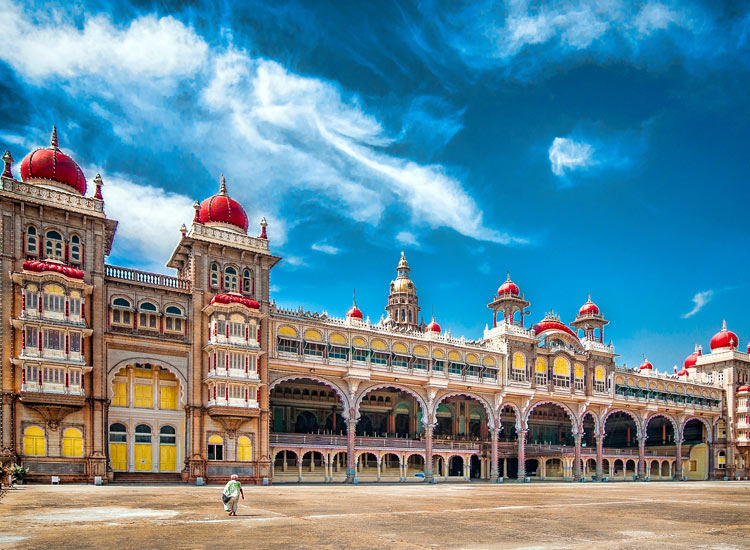 Mysore Palace, built in Indo-Saracenic style, houses fabulous works of art and carvings from around the world. Also known as Amba Vilas Palace, its main attractions are the Durbar Hall, Marriage Pavilion and Belgian stained glass. A couples of souvenirs shops are also housed inside the palace, along with the Residential Museum, which consists of musical instruments. The palace, when it is illuminated on Sundays and public holidays, makes for a great spectacle. 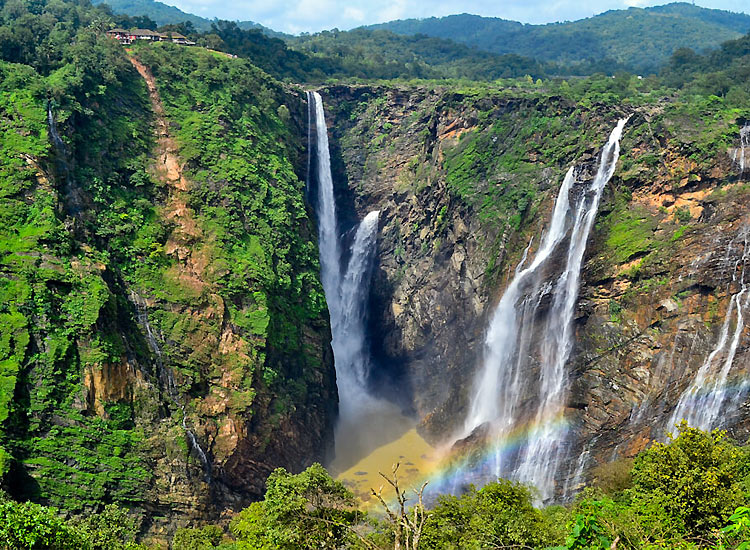 Jog Falls hold the honour of being the highest falls in Asia. When the Sharavati River makes an incredible drop of 253m in four cascades, known locally as Raja, Rani, Rover and Rocket, they come together to form the Jog Falls. The falls are at their best during the monsoons. 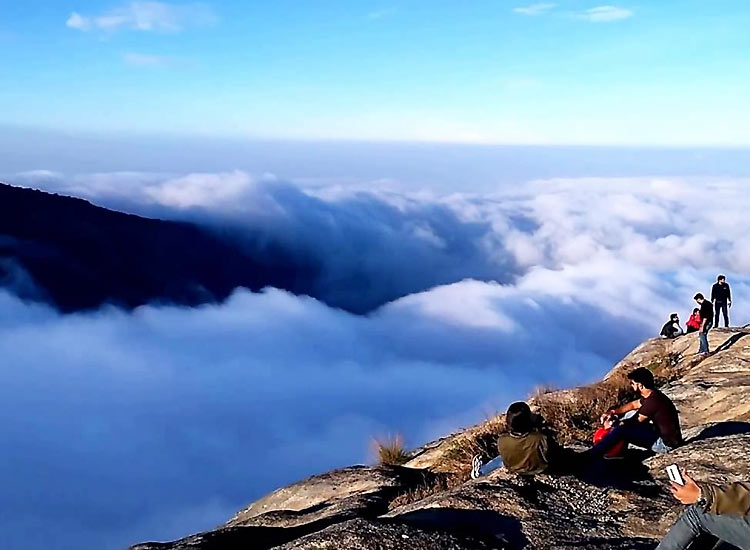 Nandi Hills is a popular weekend getaway from Bangalore, located just 60km from it. Situated at a height of 1,455m above sea level, it served as the summer retreat of Tipu Sultan and the British. The hills also get their name from the fact that there is a Dravidian-styled Nandi statue here. The place is great for photography and sightseeing. Some of the places worth checking out are Tipu Sultan’s Fort, Tipu’s Drop, Bhoga Nandeeshwar Temple and Amrita Sarovar, besides others. 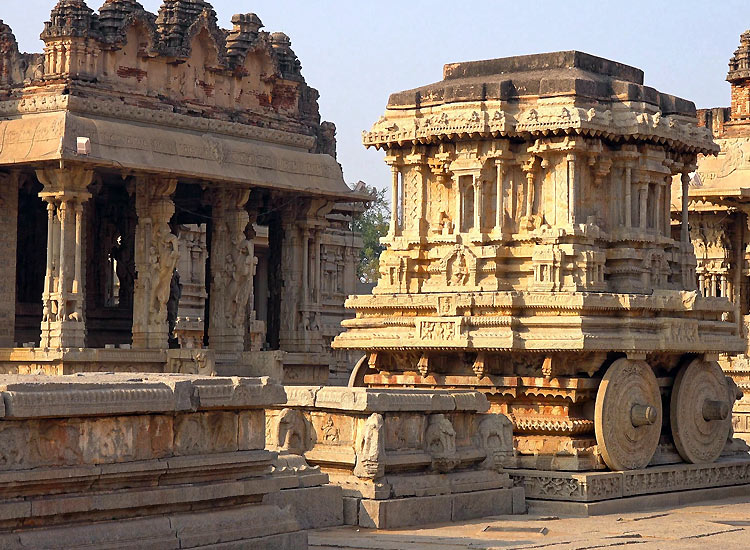 Hampi, a UNESCO World Heritage Site, are a series of ruins that show the Vijayanagar Empire in all its glory. Exploring the ruins is really an adventure in itself. You walk through bazaars and come across temples which are embodiments of architectural perfection. Some of the attractions worth checking out are Virupaksha Temple, Elephant Stables, Hazara Rama Temple and others.

The construction of Vidhan Soudha took four years for its construction. The design of the Vidhan Souda was prepared by the chief engineer in the 1950’s. Almost 5000 laborers were required for the construction of this structure, which spans to almost 60 acres. Besides the laborers, almost 1500 chiselers, masons and wood carvers were also applied. It’s known for being the largest state legislative body in the country. 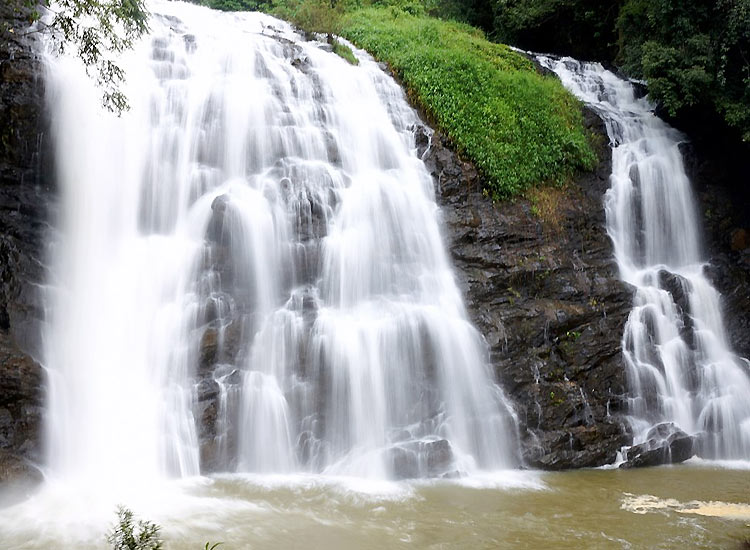 Visiting the Abbey Falls is one of the top things to do in Karnataka. Nestled comfortably between private coffee and spice estates, Abbey Falls is a great place for enjoying picnics. To reach the waterfall, you need to pass through coffee bushes and tall trees with vines wrapped around them. The best time to visit the Abbey Falls is during the monsoon when they are the most beautiful.

[Explore most captivating waterfalls of India.] 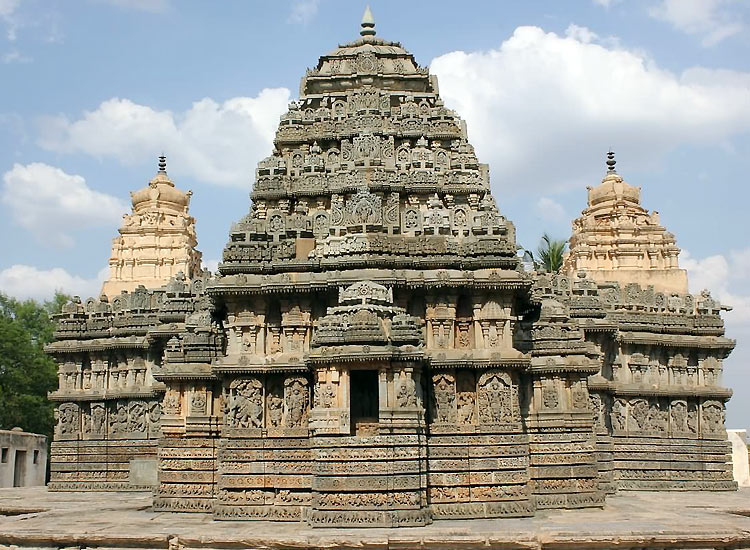 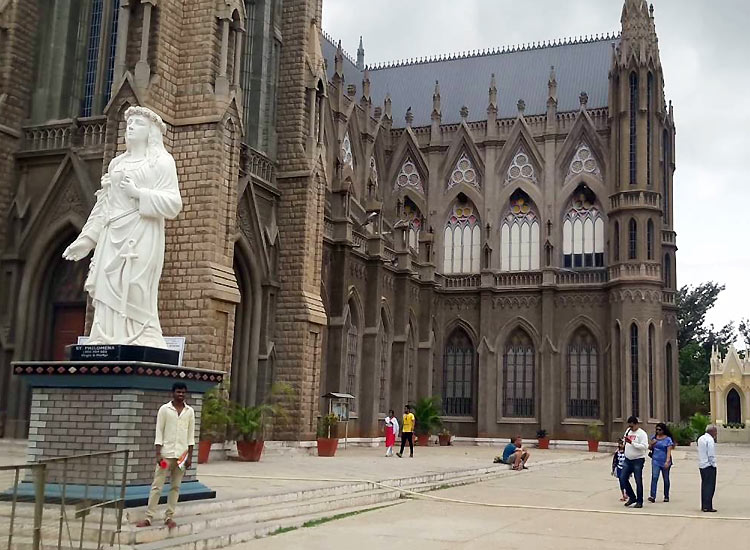 St. Philomena’s Church in Mysore is one of the largest churches in India can astounds everybody with its architectural splendour. It is also the second largest church in Asia and stands as a symbol of the religious harmony which existed in Mysore. The main attraction of the church is the twin spires which measure around 175ft in height and can be spotted even from a mile away. There is a cross on each spire which measures 12ft in length.