Discover the Roots of Ancient Buddhism with Monasteries in Bhutan

Posted on January 31, 2018 by Debasree Chakraborty 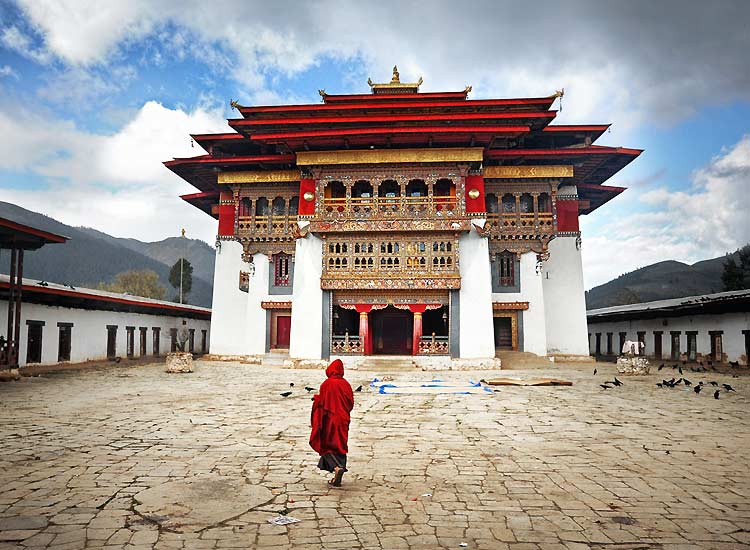 Bhutan, the mountain kingdom in Himalayas is one of the most beautiful places on Earth. Spectacular natural beauty, pleasant weather, happy people and a number of amazing Buddhist monasteries in Bhutan lure travellers from all over the world for a visit. Locked between Tibet and India, Bhutanese call the country, the ‘Land of the Thunder Dragon’.

Mysterious, enamouring and blissful, it is home to some of the most exquisite Buddhist monasteries in the world.  The monasteries of Bhutan are a prominent and significant part of the history of the country. The spiritually-charged monasteries are not only known for cultural and religious activities but for their preservation of national treasures, weapons, written records, books etc.

Here, we have a list of charming monasteries in Bhutan that you must cover on your holiday. 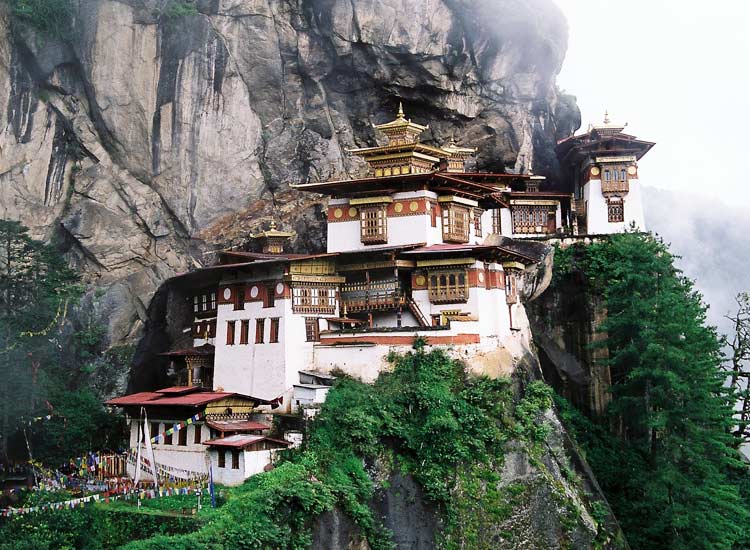 Popularly known as the Tiger’s Nest, Taktsang Dzong is one of the famous monasteries of Bhutan. Positioned at the edge of a cliff, 900 meters high, it appears like floating in the air. The monastery is dedicated to the sect of Mahayana Buddhism. Legends state that Guru Rinpoche arrived on a tigress’s back from Tibet here and introduced Buddhism to Bhutan. The legend gave its name; as Taktsung means ‘Tiger’s Lair’ in Dzongkha.

Overlooking the picturesque Paro Valley and the Himalayan peaks, the only way to this Taktsang is an 8 km hike or a horseback ride. You will be greeted by colourful prayer flags fluttering in the wind. Turn the prayer wheels for wheels for blessings. Bow your heads to the illuminating golden idols. Do not miss to explore the ancient caves and learn about the legends.

[Get a chance to discover Charming North East with Bhutan.] 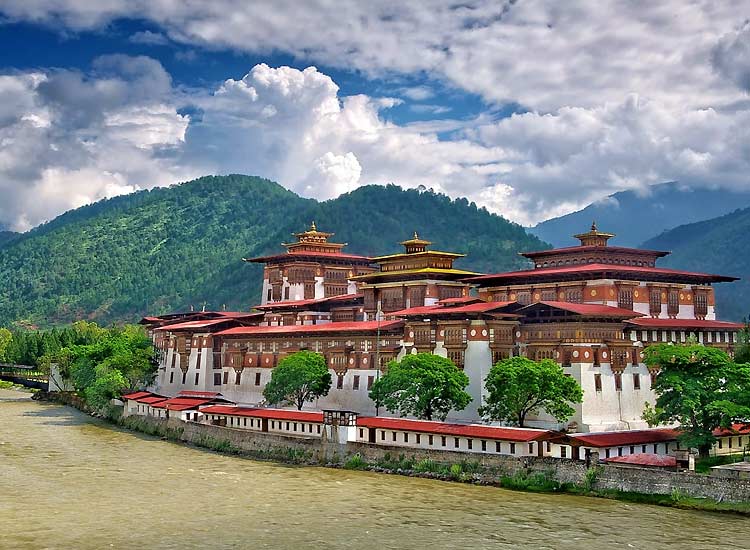 The second oldest and also the second largest monastery in Bhutan, Punkaha Dzong is one of the scared sites you must cover on your Bhutan holiday. In fact it would not wrong to state Punakha is one of the most beautiful monasteries in the world.

In local dialect, the name means ‘The Palace of Great Happiness’. Settled on the confluence of the rivers Po Chhu and Mo Chhu, the peaceful and tranquil atmosphere deserves your attention. Even the current Kind and Queen of Bhutan got married here in this blessed environs. Punakha has been linked with Bhutanese history since its construction in the 17th century. It served as the capital of the country and hosted the first national assembly in 1953. 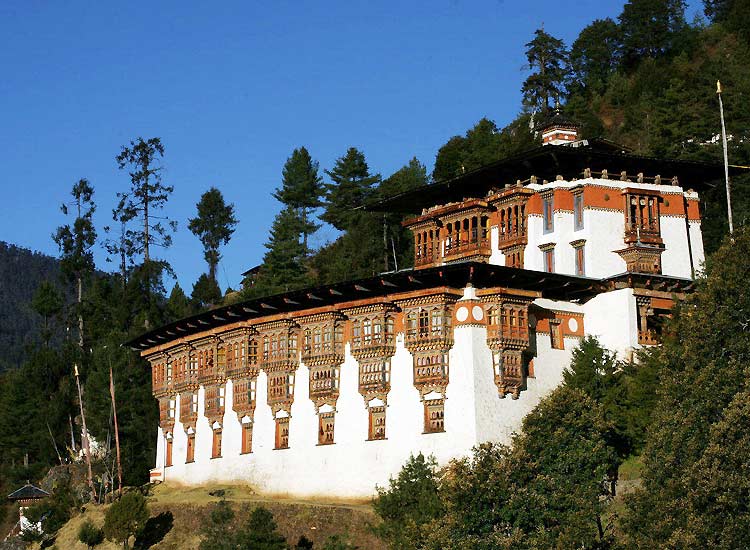 The list of amazing Buddhist monasteries in Bhutan is incomplete without a mention of the Tango Monastery. Sited near the Cheri Mountain around 14 km away from capital city, Thimphu, it is one of the scared sites of ancient Buddhism in Bhutan.

Tango Monastery is also known as ‘Horse head’. It is inspired from the God Tandin who is said to have the head of a horse. It has had religious significance since it sheltered the Lama who brought the Drukpa Kagyupa school of Buddhism to Bhutan. The monastery was built there in the 15th century by Drukpa Kunley (“The Divine Madman”). It is the highest center of Buddhist learning in the country; almost every Je Khenpo (religious head of Bhutan) completes the 9-year program here.

[Embark on a cultural tour to Bhutan with this package.]

Located in the heart of Bhutan, along the swift Mandge Chu River, Trongsa is one of the most beautiful monasteries in Bhutan. Enveloped by lush greenery, looming mountains, the sacred site has a calming effect on all those who visit. It is rightly named the “Door to Heaven”.

The Trongsa Dzong is the biggest monastery in Bhutan. Built in the 16th century, it has been the stronghold of Wangchuck Dynasty. The days of their ruled have ended but have left behind splendid relics in the impressive museum converted from the watchtower. Learn about the history of the kingdom. About 200 monks reside in the monastery. The winter festival Trongsa Tshechu is celebrated grandly here. If you are a nature and wildlife lover, do not miss a visit to Trongsa. 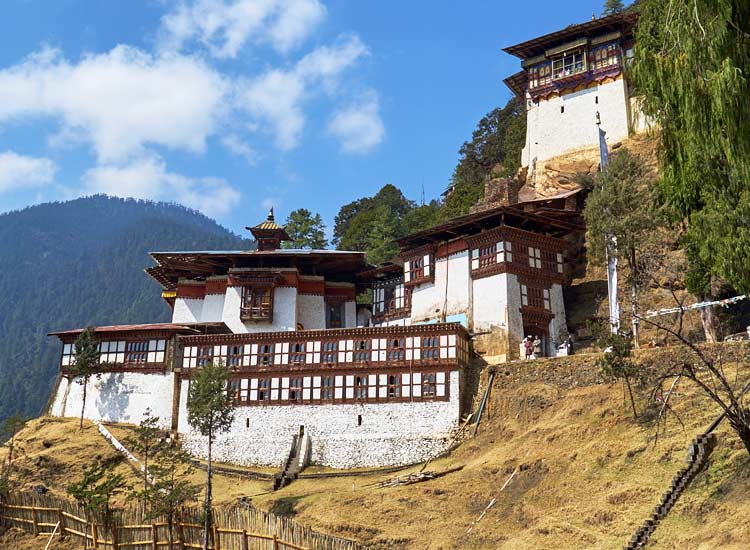 Cheri Monastery also known as Chagri Dorde is one of the must visit monasteries in Bhutan. Nestled on a hill at an altitude of 2850m, the revered site overlooks the pictorial Thimphu Valley. The 16th century structure reveres Guru Padmasambhava and many other names of Buddhism but its noteworthy for its beauty and mainly the scenic trail.

Legends state that in the 8th century Guru Padmasambhava blessed the monastery and in the 13th century it was visited by Phajo Drugom Zhigpo. The Tibetan Lama established the Drukpa Kagyu tradition in Bhutan and make Cheri their retreat. Hike up to the Cheri Monastery as the journey here as beautiful as the destination itself. Listed among the must visit destinations of Bhutan, here you can learn more about the Buddhist philosophy and enjoy the view.

[Visit three of the beautiful Himalayan countries with this package.] 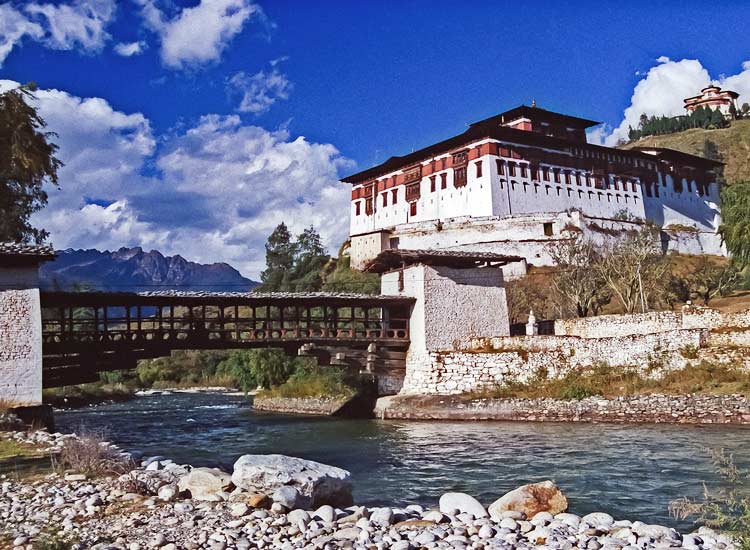 Rinpung Dzong also known as “the fortress of the heap of jewels” is one of the beautiful monasteries in Bhutan. The holy Buddhist fortress in Paro is named in the UNESCO list of tentative world heritage sites in Bhutan.

Built in the 17th century, the monastery now serves as the administrative seat of the district of Paro, and also houses state monastic community of about 200 members. This Dzong is regarded as one of the finest Bhutanese architecture. The masterpiece is made of intricate wood work, large beams slotted into each other without the use of nails. Paro Tsechu, the festival of masks is the biggest celebration here. The huge (30m X 45m) Thangka commissioned in the mid-18th century is displayed on the last day which draw visitors from all over the world. 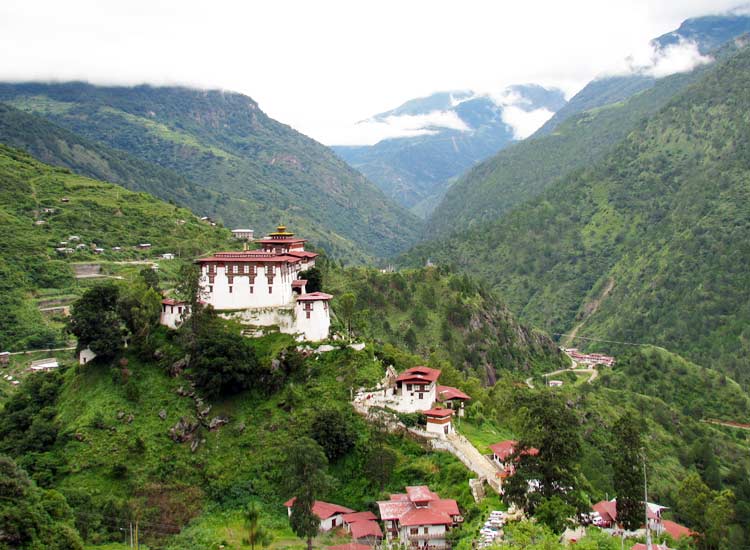 Located in the remote Lhuentse district in Bhutan, the Lhuentse Dzong is a serene beauty nestled in the picturesque valley. Originally a temple, it is built on the site where Ngagi Wangchuk meditated in 1551. Lhuetsne is offbeat and one of the most calming sites in the already very tranquil setting of Bhutan.

According to legends, a revered monk was looking for a winter seat, the local deity appeared to him in the form of a white, bleating goat at the site where the dzong is located now. Taking the bleat to be an auspicious sign, he built a temple. The bronze statue of Tshepame is the most sacred artefact in Lhuntse Dzong. Locals believe that smoke rises from the grave in the eighth month, prior to the celebrated “blessed rainy day.” 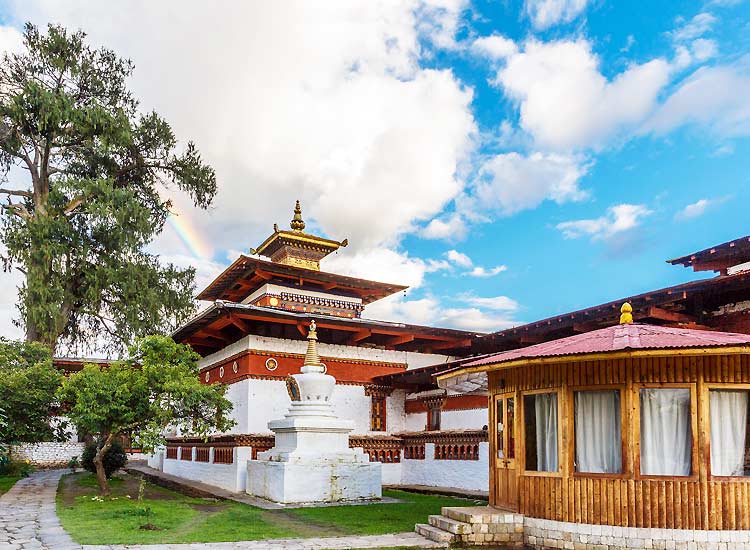 Kyichu is said to be one of the main 12 temples of the 108 temples that were built overnight across Tibet and borderlands. The temple is revered all sects of Tibetan Buddhism and have concealed teachings (terton). The main attractions are – the 7th century Jowo Jamba Statue, eight standing bodhisattvas, statue of Zhabdrung and Guru Chenrizig with 11 heads and 1000 arms. It’s also believed the two orange trees here, bears fruit throughout the year. 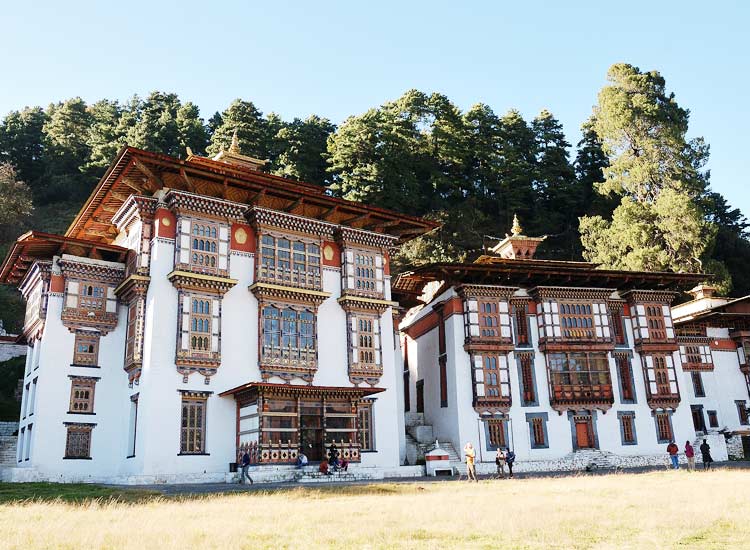 According to legends, in the 8th century Guru Padmasambahava left his body imprint ‘kur’ (body) ‘jey’ (imprint) inside the cave here. Thus, giving the name Kurjey to the monastery. The lhakhang is made up of three buildings. The oldest structure dating to the 17th century while the newest structure was built in commandment of the first King of Bhutan. The mystic magnificence never ceases to amaze visitors. Enclosed by 108 miniature chortens, the astounding architecture and sacred relics, it brings travellers from all over the world. 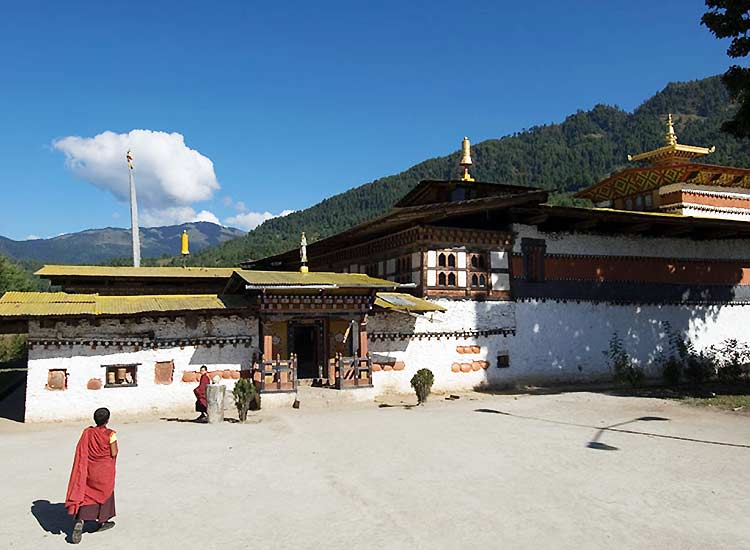 Located in central Bhutan, Tamshing Lhakhang is a major Nyingma monastery in Bumthang District. Founded in 1500s by Pema Lingpa, it is one of the must-visit monasteries in Bhutan. Tamshing is one of the few institutions in the world continuing the teachings of Pema Lingpa.

Built of stones with a circumambulation path, the monastery is home to monks that practice the austere life. The monastery premises come to life during the Phala Choedpa festival. It is held in the 8th Bhutanese month in the courtyard. The highlight of the festival being the unique dances which follow the tradition established by Pemalingpa himself. Daily worship for villagers, many personal rituals and unique collection of paintings which exemplify the region’s style lure you for a visit. 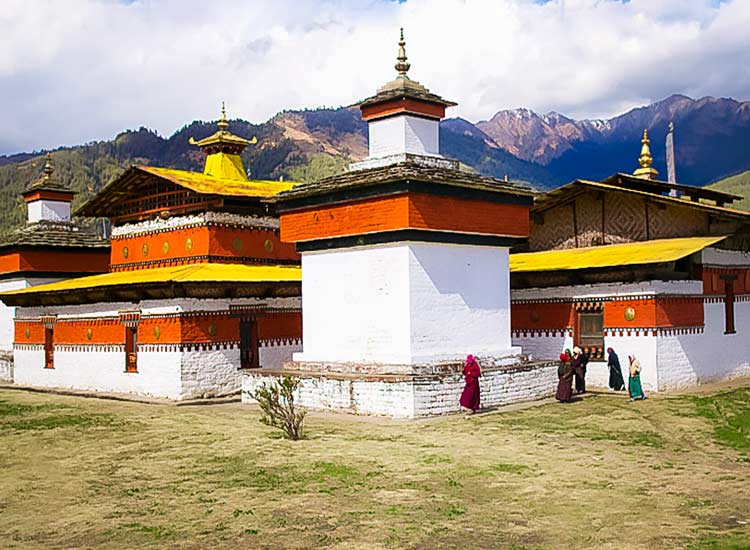 Jambay Lhakhang is listed among the oldest temples and monasteries in Bhutan. Songtsen Gampo, the Tibetan King in the 7th century AD commissioned the building. It is one of the 108 temples in the Himalayas known as Thadhul- Yangdhul (temples on and across the border), of which two are built in Bhutan.

Legend has it that Guru Rimpoche deemed Jambay Lhakhang sacred. The main relics include the future Buddha, Jowo Jampa (Maitreya) and more than one hundred statues of the gods of Kalachakra. Also, one of the most spectacular festivals in the country, called Jambay lhakhang Drup is hosted here. The highlight of the five-day festival is the fire ritual, held in the evening, where crowds gather to witness the ritualistic naked dance.

Settled atop a hillock that overlooks the Phobjikha valley, Gangteng Monastery is the largest Nyingma monastery in Bhutan. It was founded in 1613 by Gyalse Pema Thinlay, the grandson and reincarnation of Pema Lingpa.

The monastery is surrounded by beautiful villages. Visit the beautiful monastery not just for its spectacular beauty but also for black necked cranes that live in the valley. The calming effect of the holy site is one that needs to be experienced to be actually believed. 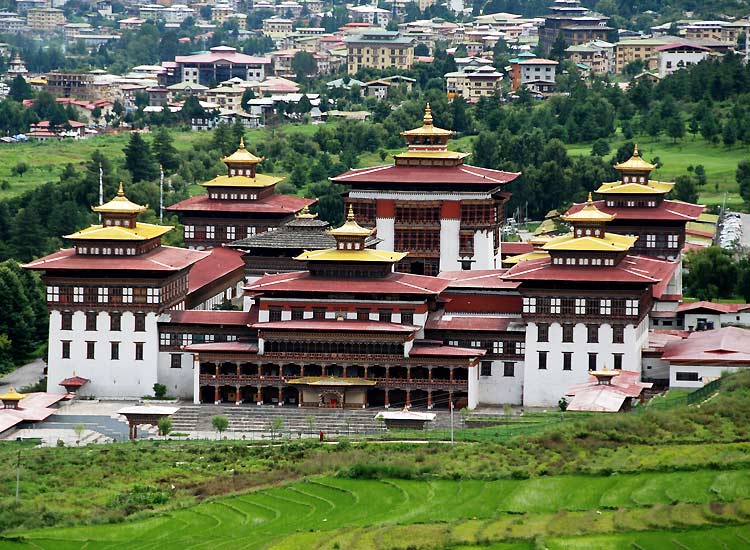 Tashichho Dzong is located near Thimphu town, next to the banks of the Wangchhu River. The impressively large structure is surrounded by well-kept lawns and beautiful gardens.

Built in the 13th century and renovated in the 19th century, the entire dzong was rebuilt in traditional fashion, without nails. The dzong housed the original National Assembly and now it houses the secretariat, the throne room and offices of the king and the ministries of home affairs and finance. Learn about the history, legends and many traditions of Bhutan at Tashiccho.